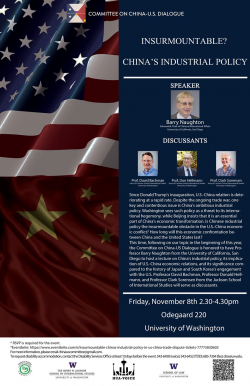 Since Donald Trump's inauguration, U.S.-China relation is deteriorating at a rapid rate. Despite the ongoing trade war, one key and contentious issue is China's ambitious industrial policy. Washington sees such policy as a threat to its international hegemony, while Beijing insists that it is an essential part of China's economic transformation. Is Chinese industrial policy the insurmountable obstacle in the U.S.-China economic conflict? How long will this economic confrontation between China and the United States last?

This time, following on our topic at the beginning of this year, the Committee on China-US Dialogue is honored to have Professor Barry Naughton from the University of California, San Diego to host a lecture on China's industrial policy, its implication of U.S.-China economic relations, and its significance compared to the history of Japan and South Korea's engagement with the U.S. Professor David Bachman, Professor Donald Hellmann, and Professor Clark Sorensen from the Jackson School of International Studies will serve as discussants.

Barry Naughton is the Sokwanlok Chair of Chinese International Affairs at the School. He is one of the world’s most highly respected economists working on China. He is an authority on the Chinese economy with an emphasis on issues relating to industry, trade, finance and China's transition to a market economy.

Recent research focuses on regional economic growth in China and its relationship to foreign trade and investment. He has addressed economic reform in Chinese cities, trade and trade disputes between China and the United States and economic interactions among China, Taiwan and Hong Kong.

Naughton has written the authoritative textbook “The Chinese Economy: Transitions and Growth,” which has now been translated into Chinese. His groundbreaking book “Growing Out of the Plan: Chinese Economic Reform, 1978-1993” received the Ohira Memorial Prize, and he most recently translated, edited and annotated a collection of articles by the well-known Chinese economist Wu Jinglian. Naughton writes a quarterly analysis of the Chinese economy for China Leadership Monitor.