Violence by the People, for the People: Torture and Police Brutality in Democracies 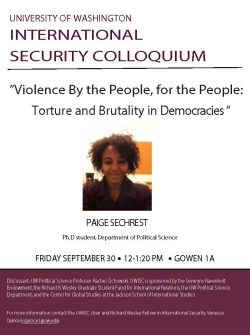 The University of Washington International Security Colloquium (UWISC) welcomes Paige Sechrest, Ph.D student in the UW Department of Political Science. Paige will present a talk titled "Violence by the People, for the People: Torture and Brutality in Democratic States."

The talk will be held on Friday, September 30, 11:30am-12:50pm in the Olson Room (Gowen 1a). UW Political Science Professor Rachel Cichowski will act as discussant.
***Please note the time change, 11:30am - 12:50pm. To accommodate some of our IR colleagues (the more the merrier!), Fall Quarter UWISC seminars
-- 9/20,10/21,12/9 -- will be held from 11:30am - 12:50pm in Gowen 1A.****
Paige Sechrest is a fourth year doctoral student in the Political Science department, specializing in comparative politics, public law, and political methodology. Her research interests include critical race theory, ethnic politics, religion, and political violence, as well as text data and natural language processing. She was the recipient of the Speier Fellowship in 2013 and has presented her work at the Association for the Study of Economics and Religion, the Law and Society Association, and the Western Political Science Association.
UWISC is sponsored by the Severeyns Ravenholt Endowment, the Richard B. Wesley Graduate Student Fund for International Relations, the Center for Global Studies at the Henry M. Jackson School ofInternational Studies, and the Department of Political Science
People Involved:
Paige Sechrest
Rachel A. Cichowski
Event Type: