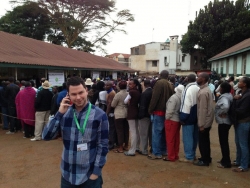 The UW Department of Political Science is excited to welcome James D. Long as a new Assistant Professor this fall. Long will teach courses in African politics, comparative politics, and field research methods. He joins the UW faculty from Harvard, where in 2012-13 he was an Academy Scholar at the Harvard Academy for International and Area Studies. Long completed his PhD in Political Science at the University of California, San Diego (UCSD) in 2012. Long’s research examines many aspects of elections in emerging democracies, including why citizens turn out and vote, why voters choose certain candidates over others, the strategies that politicians use to rig the vote, and patterns of election violence.

As part of his work, Long, along with his adviser at UCSD, Clark Gibson, conducted a nation-wide exit poll in conjunction with the International Republican Institute (IRI) during Kenya’s 2007 election. According to Long, “There is nothing more exciting than election day in Kenya. Voters queue before the sun rises, mothers carry children on their backs while they cast ballots, and party supporters wear bright colors and sing party slogans. Unfortunately, corrupt political agents also engage in a number of illicit acts to win fraudulent votes, and campaigns tend to turn violent. So in one sense, democracy thrives in Kenya, but in another, Kenya has a formidable path towards realizing its democratic potential.” This corruption pushed to the forefront of Long’s research when the exit poll showed a victory for the opposition party at odds with the official vote count. IRI tried to bury the results of the exit poll and a profile in the New York Times suggested that IRI may have done so at the behest of the Bush Administration, believed to be in favor of the incumbent candidate. Eventually, Long and Gibson published the exit poll data which Long is also using as part of the book manuscript he is currently writing.

Long comments that “the controversy over the exit poll taught me an important lesson about social science research. As academics, we think we can simply observe and report on various social phenomena. But the simple act of observing often has real world consequences.” Indeed, his experience in Kenya has led to a research agenda that tries to harness the power of observation to improve elections in developing democracies. With colleagues, Long developed an innovative anti-fraud technology which relies on the randomized announcement of monitoring by domestic election workers who use a customized app and smartphone technology to record data at assigned polling stations. This technology has the power to detect, and reduce, the likelihood of fraudulent ballots. He and his colleagues have deployed their monitoring package for elections in Afghanistan (2010), Uganda (2011), and Kenya (2013), and their results have been covered in Slate, Foreign Policy, and the Economist.

Long’s research has taken him to countries as diverse as Ghana, Egypt, and Afghanistan. He took his first trip to Africa, an archeological dig in Ethiopia, while an undergraduate student at the College of William and Mary. He then traveled to Kenya and engaged in a study abroad trip in Tanzania. In 2002, he worked with former child soldiers in Freetown, Sierra Leone, and wrote his senior honors thesis on rebel movements in Sierra Leone.

He credits his parents for his love of travel and desire to visit new places. He grew up an Army “brat,” moving from Suburban Washington, DC to Kansas, Germany, New York, Texas, and Colorado before staring college. Long observes, “I think most people’s parents probably would have asked ‘Why Africa?’ My parents asked, ‘When can we visit?’”

Long is eager to become a part of the University of Washington community citing “its excellent students, stellar faculty, and the school’s location in Seattle – a hub of innovation where many people in the public and private sector are developing ways to use simple technology, like smartphones, to address real world problems.”