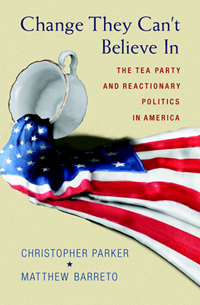 Is the Tea Party like the Ku Klux Klan? Tea Party sympathizers would reject the comparison out of hand. Tea Partiers claim they’re about core conservative issues such as small government and fiscal responsibility. Thus, they resist the policies of the current president and his administration on ideological grounds – the government is too big and spends too much money – not on racial ones. Critics of the Tea Party reject this claim and believe that Tea Partiers are, indeed, motivated by racism. Simply put, some critics charge that Tea Partiers cannot abide the image of a black man in the White House.

Recent research supports both claims. Tea Partiers are motivated by both conservative principles and racism: a preference for small government increases the probability that one supports the Tea Party by 9 percent while racism increases the probability of support by 14 percent. Even a cursory glance at American history reveals that these tendencies are deeply rooted in American politics. But, the fact that they are so imbedded in our political culture limits their ability to explain specific changes in American politics.

So how do we explain the Tea Party’s sudden emergence and intensity, beyond what ideology or racism is capable of elucidating? We need to look at a less commonly recognized motivation for right-wing movements. The same motivation that spurred the members of the Ku Klux Klan (KKK) of the 1920s: concern that their way of life, their cultural hegemony, was in danger.

Consider the Klan of the 1920s. White, middle-class, middle-aged, Protestant men dominated the KKK. These men feared the subversion of the American way of life from many quarters, encompassing social, political, and economic life. They dreaded that the “New Negro,” returning from World War I, would forget his place in the social order. They fretted about Jewish control over capital. They worried about papal influence on the American political scene as a result of Catholic immigrants.

Now, consider the Tea Party. Similar to the Klan, white, middle-class, middle-aged, Protestant men dominate the Tea Party’s ranks. However, in the roughly 80 years between the Klan and the Tea Party, the threat axis shifted: Jews and Catholics are now more, or less, mainstream. The same cannot be said of black folks. The image of Barack Obama – a black man whose father was from an African nation and who happens to hold the highest office in the land – became a touchstone for that threat.

In short, the Tea Party is best explained as a reaction to the Obama presidency, and what it is perceived to represent. Indeed, the belief that President Obama is a socialist increases the probability by 14 percent that people support the Tea Party. Rank-and-file Tea Partiers believe that the ascendance of Barack Obama to the highest office in the land represents the subversion of the social and cultural dominance of WASPs or, to use a more familiar term: “real Americans.”

Of course, there are differences between the two right-wing movements. The KKK was preoccupied with ethnocultural issues, ones associated with blacks, Jews, and Catholics. The Tea Party, on the other hand, is concerned with having a black president, the presence of undocumented workers, and the recognition of same-sex rights. Even so, they have much in common. Both groups believe that policy differences are matters of good versus evil, instead of simple political differences. Moreover, like the KKK, the Tea Party is willing to sacrifice the social and economic stability preferred by doctrinaire conservatives for the ability of “real” Americans to maintain their place in the social hierarchy.

Earlier this year the Tea Party made waves in a number states by backing anti-immigration legislation along with voter ID laws that will effectively restrict the ability of marginalized groups to vote. Moreover, the recent government shutdown clearly demonstrated the power of the Tea Party to make wakes at the national level. Given their impact on the American political scene, we should continue to consider the motivations of those who support the Tea Party.

Commentary by Professor Christopher Parker based on research conducted for his book co-authored with Professor Matt Barreto, Change They Can't Believe In:  The Tea Party and Reactionary Politics in America, Princeton University Press, 2013.