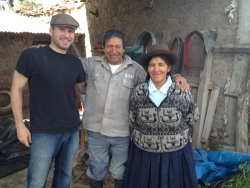 During one's time as a student in political science, he or she most likely encountered graduate students as the teaching assistants who offered quiz sections and answered questions during office hours. Yet there is much more to graduate students’ careers that few undergraduates think about.  A critical concern of any graduate student is the research that will lead to their PhD.  Our graduate students are conducting innovative research across the discipline and globe.  Small research grants (ranging from $1,000 – 2,000), established four years ago with various endowments funded through the generosity of former faculty members and alumni, provide graduate students the ability to engage in research in locations near and far.  The destinations include California, New York, Peru, and the Democratic Republic of the Congo. The following are just a few examples of the exciting work being done by UW graduate students.

Carolina Johnson researches the local political impact of institutional reforms giving the general public direct control over portions of a city budget. Funding from the David J. Olson Graduate Research Grant in Labor and Subnational Politics allowed her to spend two months attending participatory budget meetings and interviewing dozens of citizens and city officials involved in these processes in four of New York City’s boroughs as well as Vallejo, California. She credits the grant with helping her “build connections and credibility in the field” that will benefit her current and future research.

Steve Zech, awarded the Peter May Research Grant, examines civilian responses to violence during internal armed conflict in Peru during the 1980s and 1990s. He argues that understanding how actors address the tension between their beliefs about violence and their own use of violence is key to understanding violent actions and the differences between those communities that maintain nonviolent strategies and those that actively engage in armed resistance. Steve used his funds to spend three months in Peru conducting research in the Peruvian Truth and Reconciliation Commission archives. This archival work compliments the interviews he conducted in two dozen communities with self-defense force members, victims of violence, political and religious leaders, and coca farmers.

Milli Lake has spent over a year conducting research in the Democratic Republic of the Congo and South Africa, working to understand these two state’s divergent responses to sexual violence. The Kaplan-Levi Civic Engagement Grant allowed her to extend her research beyond ‘how and why’ state policies and court rulings were produced, to the broader consequences of criminal trials. Milli interviewed 51 survivors of gender-based violence in the Democratic Republic of Congo, and conducted focus groups to understand why individuals turned to the courts in the aftermath of violence in spite of the general collapse of the legal system, endemic corruption and the failure of the state to provide basic goods and services to its people. Milli credits the Kaplan-Levi Grant for her ability to conduct these interviews “which have been critical to the overall framing and understanding” of her dissertation.

As these brief snapshots indicate, the variety of endowed funds that have provided seed grants have allowed graduate students to take advantage of opportunities that would otherwise be out of reach.  These have been used at critical times in their graduate careers when they are assessing the feasibility of research projects, collecting initial data for dissertations, and seeking more depth for their research.  We thank those donors who have contributed to the following endowments that have helped fund graduate research grants and travel: the Ione E. Curtis Endowment, Dennis and Diana Durden Endowment, Camden Hall Endowment, Bryan and Diane Jones Graduate Endowment, David J. Olson Endowment, Robert Kaplan and Margaret Levi Civic Engagement Endowment, and the Peter J. May Endowment.  Continued support for these endowments is critical to advancing graduate student research opportunities.