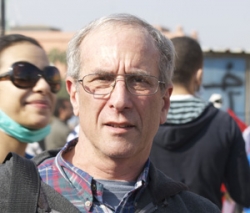 After serving nearly 30 years as a member of the Political Science Department, Professor Ellis Goldberg has retired. At the end of Winter quarter, he assumed the title of Professor Emeritus. He plans to remain an active member of the University of Washington community continuing his research on the Arab Spring, teaching part-time, and directing the Center for Middle East Studies in the Jackson School of International Studies.

Professor Goldberg joined the Department of Political Science at UW in 1985 after completing his Ph.D. at UC Berkeley. He was promoted to associate professor in 1991 and full professor in 2002. He has been a central figure in the department and internationally in the study of comparative politics.

A highly accomplished scholar, Professor Goldberg has conducted research and written about Middle Eastern politics, Muslim political movements, post-colonial trade, human rights, labor studies, and comparative politics more generally. A member of the Middle East Studies Association, he is a recipient of a John Guggenheim Memorial Fellowship and has been named a Carnegie Scholar. Professor Goldberg has twice held visiting appointments at Princeton’s Department of Near Eastern Studies and earlier at their Transregional Institute along with visiting appointments at Harvard’s Kennedy School of Government and earlier at their Center for Middle Eastern Studies as well as at The American University in Cairo. He has traveled extensively throughout Egypt and Tunisia.

Professor Goldberg is the author of Tinker, Tailor and Textile Worker: Class Politics in Egypt (University of California Press, 1986) and Trade, Reputation and Child Labor in 20th Century Egypt (Palgrave/MacMillan, 2004), editor of The Social History of Labor in the Middle East (Westview, 1996) and co-editor of Rules and Rights in the Middle East: Democracy, Law and Society (University of Washington Press, 1993). He has published a number of articles in leading journals in comparative politics, Middle Eastern politics, and political theory.

Professor Goldberg has been a prolific commentator on events in Egypt and the Middle East, developing a following throughout the world. He has contributed commentary pieces to Foreign Policy Magazine, Jadaliyya eZine, and openDemocracy as well as other online forums. He was present in Cairo during the Arab Spring and maintains a popular blog where he posts about events in Egypt. In addition to talks he has given as part of his visiting appointments, he has been a featured panelist at the UW in a variety of forums on developments in the Middle East. He has also organized a number of scholarly workshops including events at the Bellagio Center of the Rockefeller Foundation, The American University Cairo, Harvard University, and Princeton University.

In the coming months, Professor Goldberg plans to finish a book on the politics of the Arab Spring as well as other work on the origins of the Egyptian legal system and the impact of global energy transitions on European politics. He also hopes to return to earlier work comparing the medieval European and Middle Eastern political economies. He argues that pre-modern Europe was, contrary to the received wisdom, neither poorer nor more backward than the Middle East. He will continue to live in Seattle and hopes to remain in frequent contact with friends in the department. He wishes all his colleagues continued success in their many and remarkably brilliant and enlightening scholarly undertakings and looks forward to reading what they write.