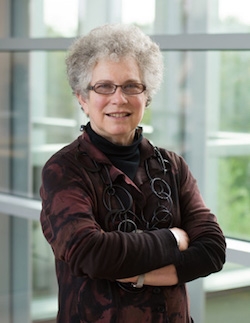 After serving 40 years as a member of the Political Science Department, Professor Margaret Levi has assumed the Directorship of the Center for Advanced Study in the Behavioral Sciences (CASBS) at Stanford University with an appointment as professor in Stanford's Political Science Department. The Directorship of CASBS is a prestigious appointment that provides a capstone to Professor Levi’s illustrious career. She assumed the new role at the end of March at which time she retired from the University of Washington. She is now Professor Emerita in our department and the Jere L. Bacharach Professor Emerita of International Studies within the UW College of Arts and Sciences.

Professor Levi joined the Department of Political Science at UW in the autumn of 1974 as an assistant professor, was promoted to associate professor in 1981, and full professor in 1987. Over the years she has been the Harry Bridges Chair and Director of the Harry Bridges Center for Labor Studies (1996-2000), the Director of the Comparative and Historical Analysis of Organizations and States (CHAOS) since 2002, and the Jere L. Bacharach Professor of International Studies since 2000. She was elected to the American Academy of Arts and Sciences in 2001 and elected in 2010 to the Washington State Academy of Sciences. She received the UW S. Sterling Munro Public Service Award in 2001.

One quickly runs out of superlatives in recounting Professor Levi's contributions to our department, the university, the profession, and society. Her visibility as a scholar, commentator, mentor, and leader in political science and the social sciences literally spans the globe. She has held a wide array of distinguished lectureships, visiting appointments, and fellowships. These include a German Marshall Fellowship, Guggenheim Fellowship, Phi Beta Kappa Visiting Scholar Award, and Woodrow Wilson Fellowship. She has held visiting positions and/or given major lectures at the Australian National University, University of Bergen, the Budapest Collegium, Cardiff University, the European University Institute, Kobe University, the Max Planck Institute in Cologne, the Juan March Institute, Oxford University, and Peking University. Most recently, she served as Chair in U.S. Politics at the United States Studies Centre of the University of Sydney, and as Senior Fellow at the Watson Institute of International Studies, Brown University.

Professor Levi is the author or co-author of numerous articles and six books, including Of Rule and Revenue (University of California Press, 1988); Consent, Dissent, and Patriotism (Cambridge University Press, 1997); Analytic Narratives (Princeton University Press, 1998); Cooperation Without Trust? (Russell Sage, 2005); and her most recent co-authored book, In the Interest of Others (Princeton, 2013). Among other scholarly roles, she is the co-general editor of the Annual Review of Political Science, general editor of the Cambridge University Press Series in Comparative Politics, and co-general editor of the Russell Sage Foundation Press Series on Trust. Her research has been funded, among other sources, by the American Bar Foundation, National Science Foundation, the World Justice Project, and the Russell Sage Foundation.

By undertaking various leadership positions, Professor Levi has made enormous contributions to the political science profession and the social sciences. These include service as President of the American Political Science Association, membership on and chairing the Executive Committee of the Board of Directors of the Social Science Research Council, as well as similar roles for CASBS at Stanford. She has been a member of international advisory committees for the Center for Advanced Study in the Social Sciences of the Juan March Institute in Madrid and the Institute Barcelona d’Estudes Internacionals in Barcelona. Professor Levi has also made major contributions to society through her involvement with the World Bank, World Justice Program, World Justice Commission of the American Bar Association, UW Advisory Committee on Trademarks and Licensing, and a number of civic-related roles in Seattle and the region.

As Professor Emerita in our department, Professor Levi plans to stay engaged with current collaborative projects with faculty and students, in continued local hosting of components of the Cambridge University Press Seminar series that she has led for a number of years, and in supervising and serving on dissertation committees of graduate students.

In reflecting on her career at the UW Professor Levi comments:  "I have matured with the Department of Political Science. I came as a young scholar learning the ropes and eager to make my mark. I depart grey-haired and wiser but still learning from the wonderful scholars hired over these many years. I take greatest pride in my contributions to the creation and flourishing of the Harry Bridges Center for Labor Studies, the active role of the university in protecting workers who produce our logo'd goods, and the growth of a serious and interdisciplinary field of comparative political economy. The most personally satisfying of all the many changes I observed is the positive transformation in the quality, training, and success of our graduate students. They help confirm my commitment to the value of public universities, a commitment that attracted me to the University of Washington in 1974."