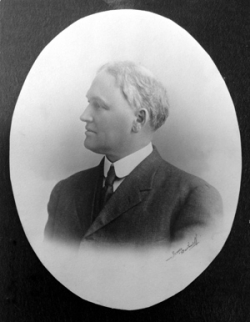 The excellence of today’s Department of Political Science may not have been foretold by our inauspicious beginning when J. Allen Smith—the namesake of Smith Hall on campus—came to the UW as the Professor of Political Economy in 1897. By 1911 the Department of Political and Social Sciences had four members, all male. An assistant professor of economics was added two years later for the lofty sum of $1,500 per year. A then recent Ph.D. of the department, the first female hire, was also named a temporary instructor.

Controversy over Smith's book, The Spirit of American Government, in which he raised the possibility that America's founders were pursuing self-interest in fashioning the American Constitution led to efforts by some in the State Legislature to abolish the department and calls to fire Smith. In response, UW President Henry Suzzallo employed university bureaucratic politics to his advantage by splitting the department into thirds: a Department of Commerce, a Department of Sociology, and a Department of Political Science (isolating Smith as the lone faculty member). This division provided the makings of today’s social science division. J. Allen Smith went on to become the first Dean of the Graduate School. His legacy is honored today with one of the largest graduate student endowments in the department that is used each year to recruit J. Allen Smith Graduate Fellows.

Fast forwarding to 1934, separate fields of specialization emerged in the Department of Political Science with faculty, still all male, designated by field: American Government and Public Law, Politics and Administration, Comparative and International Government, International Law and Politics, and Political Theory. This group included Linden A. Mander who served for 40 years (1927-1967) and was a notable commentator in the later years of his service on KCTS television in a popular series "University Conversation."  His legacy is recognized with an endowment in his name. It also included Charles E. Martin who holds the honor of being our longest-serving department chair with a record 26 years of service (1924-1951). None of us desire to meet or exceed that record!

The subsequent years saw many developments in our department that mirrored actions and controversies across the discipline. These included a more problem-oriented focus prior to and during World War II as reflected in Chair Martin's 1947 hiring request: "We need a mature man dealing in the general field of the relation of government to people and vice-versa, handling such courses as political parties, elections, public opinion, the government, economic interests, the public mind, etc." By 1955, under the leadership of Hugh Bone as department chair, faculty hiring plans and the departmental emphasis on practical politics reflected the behavior revolution in the social sciences. Social controversies along with political controversy over the Vietnam War rocked the department in the late 1960s and the early 1970s.

The stability and excellence that are hallmarks of the department of today took form under the leadership of Don Matthews who became department chair in 1976. Matthews initiated a governing structure, faculty hiring practices, and attention to graduate education that contribute to departmental excellence today. David Olson succeeded Matthews as department chair, serving from 1983-1988, during which time he built on the prior initiatives in faculty hiring while strengthening internship programs, graduate student support, administrative staffing, and led our entry into the desktop computer age.

Don McCrone, Lance Bennett, and Michael McCann followed in succession as chairs, each making notable contributions in an era marked mainly by growth in faculty numbers, graduate students, department resources, and undergraduate enrollments. Steve Majeski, current Associate Dean for Research and Infrastructure in the College of Arts and Sciences, served a record-setting duration as chair for the modern era, 2000 through 2009, during which time he led the development of a number of departmental research centers, a major programmatic initiative in the study of race and ethnicity, and the creation of a number of professorships and other endowments. With the economic downturn, we suffered some faculty losses and retrenchment but remained steadfast in our commitments to research and graduate and undergraduate education.

Especially in the recent era, the department has benefitted from strong leadership in undertaking new initiatives around research and teaching and from strong alumni support and engagement. Needless to say, we have come a long way since our more tentative beginnings more than 100 years ago. Our faculty continues to conduct cutting edge research that occasionally invites controversy given the relevance of much of the work to important issues of our day. Unlike the J. Allen Smith era where such controversy was shunned, today we recognize this work as meaningful contributions by our faculty to significant public debates.