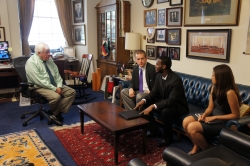 In the 1970’s William Burke was a program director at the University of Massachusetts but he had a grander vision: to create a Washington, D.C., internship program that would connect students to internships and provide them with housing and academic credit at their home institution. He founded a non-profit, The Washington Center (TWC), to provide that service to universities throughout the world. In 1977 the University of Washington Political Science Department became a partner to TWC. Since then, hundreds of UW students from majors across the campus have ventured to the nation’s capital, but as the seat of U.S. political power it holds a special attraction for Political Science students.

Students in Political Science have trekked to D.C. for internships with Congress, the White House, and federal departments as long as internship programs have existed. While students often dream of working for organizations with prestige and name recognition, finding an internship can be a trial. Organizations are flooded with applications, especially in summer, and excellent matches for learning and experience are not always obvious. Over the last 40 years TWC has established relationships in a variety of fields with a wide range of organizations in the metropolitan area, including small organizations that rely on interns as critical partners. With the resources to guarantee an internship for each admitted applicant, TWC can match students with organizations they might not have found on their own, and the applicant gets to decide which offer to accept.

Diana Eisenhauer, ’15, recently completed her internship with Whitmer & Worrall, a government relations firm. In addition to combing through news stories and attending Congressional committee sessions for hints of information relevant to the issues she tracked, she also participated in phone calls with CEOs of client companies and planned and attended client fly-ins that included meetings with a Congressional member, a staffer, and a lobbyist. “They gave me so much responsibility,” she said, “and they were always telling me how great I was doing. You expect to be just another intern. It’s really satisfying that … I got to see so much more than I was expecting. A real look at the world, not just a student’s look.”

As a pre-med student who chose Political Science for her major, Sarah Reed, ’12, appreciated the debates and open dialog in her major, especially when her friends in the sciences "often had the mindset that there were right or wrong answers."  She very much wanted to go to D.C. to see the real-world applicability of her studies and hoped to secure an internship related to policy and health, preferably for the World Health Organization. She chose TWC because of the credit arrangement and housing. Close friendships with other TWC students was an unexpected benefit. As for her internship, TWC found her a position with the Peace Corp’s Office of Global Health and HIV. In Sarah's case, the internship was such a perfect fit that she began full-time work immediately after graduation. Since then she has "referred to American politics study a lot" to understand an agency that is subject to a change in leadership every four years along with less predictable events such as the government shut-down.

For Tanner Doucet, '13, his curiosity about the world drove him to want a hands-on experience. Then a junior, he was placed by TWC in an internship with the Potomac Advocates, but he also worked for the Cyber, Space & Intelligence Association, an organization founded by one of his internship supervisors. As he embarked on his senior year he continued to work with the organization by flying back and forth to D.C. during quarter breaks. He found that in D.C. "small agencies do big things" and that if interns can say "yes" to what they are asked to do they "get exposure at a young age to experiences they could not have imagined and develop a depth of expertise that they did not think was possible." Tanner continued his affiliation with TWC this past year working as an Alum in Residence. In this role he attended to the well-being of the interns who lived in TWC housing and he started a pre-law club for students who intended to apply to law school.

Bill Burke passed away in 2004 but his legacy in D.C. and at UW continues in stories like those above as students continue to gain quality professional experience in a supportive environment. The internship itself is always the central experience, but the TWC program also includes a class that meets once per week, a civic engagement project, a meeting with a Congressional representative, weekly activities like lectures by prominent figures and visits to places like the Pentagon and embassies, career-related workshops on resumes and networking, and writing a portfolio that includes assignments through the term. Beyond these opportunities, the heart of TWC is the shared experience of students from different schools and different cultures who are pursuing their professional goals together and, in the process, gaining confidence about their skills and abilities. It is a potent combination.