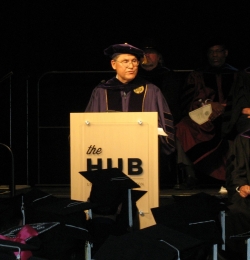 The Department of Political Science presented its annual Distinguished Alumni Award to Rogelio Riojas during our 2014 Convocation Ceremony in June.  During the ceremony, Riojas spoke to the graduating political science majors about his amazing life story and his development from a student of political science to the head of a large network of public health service providers and a member of the UW Board of Regents.

When Rogelio Riojas first set foot in Washington in the 1950s, it was a temporary stop for his family. Riojas, his parents, and his siblings were migrant farmworkers following the seasonal cycle of agricultural work around the country from their home base of Edinburg, Texas. Despite a childhood lived in transit between harvests, Riojas has put down impressively strong roots in Washington, graduating from high school in Othello, attending the University of Washington, and then going to work to give back to his Washington community—a pursuit that occupies him still.

Riojas arrived at the UW in 1969, in the thick of unrest surrounding the Vietnam War and the Civil Rights Movement. Finding himself stirred to political activism, he became involved in marches and protests at the UW and elsewhere in Seattle, beginning his lifelong commitment to social justice. He also participated in efforts to protect minority rights and add diversity to the curriculum and student body at the UW.  His activism inspired him to focus his academic efforts toward the undergraduate degree in political science that he completed in 1973.  He went on to earn two more degrees at the UW: a second BA, in economics, and a master’s degree in health administration.

In 1978, after completing his graduate degree, Riojas founded a local community health organization called Sea Mar. The organization began with a great deal of determination but little in the way of facilities, staff, and money.  Thirty-six years later, Sea Mar is today a multifaceted human services and advocacy organization that delivers healthcare to nearly 150,000 underserved people in Washington.  Sea Mar also provides housing assistance to migrant farmworkers, scholarships for children of migrant farmworkers, job training, ESL instruction, and many other social services.  Regent Riojas remains with the organization as President and Chief Executive Officer.

In his speech to the graduating seniors, Riojas explained how his degree in political science helped him to develop into the leader of a large community health organization. “This degree helped me shape my social views and priorities into concepts that helped me become a strong communicator with leaders and legislators. It taught me to be a good community organizer and be an advocate for social change. It taught me how to write well and gave me analytical skills that have been useful in setting the appropriate strategies for our organization.  It gave me a foundation of knowledge that allowed me to be more confident, more courageous, and more effective. It contributed to my sense of leadership and ability to articulate my opinions and theories in a way that could impact change.”

Riojas also noted the lasting legacy of his generation’s efforts to improve access to the University of Washington for Latino students.  Changes made in the early 1970s led directly to a large growth in the number of professionals like doctors, attorneys, and engineers in the Latino community, growth that has been crucial to improvements in the economic status and well being of Latinos in Washington.

Rogelio Riojas’ life journey from child of migrant farmworkers to student of political science at UW, and from there to the leader of a large health care organization and member of the UW Board of Regents, provides an inspiring model for today’s students.  The department’s 2014 Distinguished Alumni Award recognizes his significant career achievements and his deep dedication to improving the lives of others.