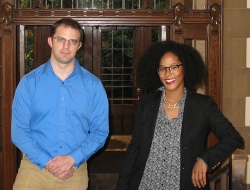 The Political Science Department is very excited to welcome two new members of our faculty this fall, Megan Francis and Jeff Arnold.
Jeffrey Arnold joins the department as an Acting Assistant Professor, and also joins the Center for Statistics and the Social Sciences (CSSS) as a Core Faculty Member. Arnold is completing his Ph.D. in Political Science at the University of Rochester, and spent last year as an instructor at Emory University. He will teach courses in quantitative political methodology and international relations, including courses in the graduate research methods sequence.

Arnold studies a variety of topics in quantitative international relations. One of his projects analyzes how data on financial markets can be used to study how wars start and end.  Arnold, who has also worked as an analyst for the Federal Reserve Bank of New York, explained how he developed this novel idea of using data from financial markets to study war. “It grew out of recognition that the prices of many financial assets are closely linked to expectations about war outcomes. Financial markets register expectations about the future, making them analogous to today’s prediction markets.”  Arnold noted, “Historical financial data can reveal which events were seen at the time as most important to the final outcome of the war.”  Arnold has used this approach to study how people’s expectations about the American Civil War changed as the war progressed. One significant finding is that even after the southern states seceded from the Union, financial markets did not anticipate the crisis escalating to war.

Professor Arnold uses data from financial markets not just to develop better understandings of U.S. history, but also to study a very broad range of international conflicts.  He is also developing cutting-edge techniques of statistical analysis.  A specialist in quantitative methodology, one of Arnold’s primary interests is in Bayesian statistical methods, particularly techniques for incorporating uncertainty in measurements and combining multiple data sources. One of his papers combines multiple measures of many different civil wars to help understand the onset and termination of war.  The statistical techniques he developed allow him to make estimates despite the fact that there are many different definitions of what exactly constitutes a civil war.

Arnold is also particularly innovative when it comes to developing novel data sources to gain fresh insights into longstanding political science problems. For example, in order to understand how leaders develop reputations, he created a measure of the fame of international leaders from the size and popularity of their Wikipedia pages. In future research, he will focus on using machine learning and natural language processing to develop large new datasets in international relations.

Arnold is excited to be joining the University of Washington community because of its reputation for interdisciplinary research and innovation in the areas of big data and data science. This Winter, he will be teaching an introductory interdisciplinary course on Statistical Methods for the Social Sciences.

Our second new faculty member is Assistant Professor Megan Francis.  Professor Francis completed her Ph.D. at Princeton University in 2008, and joins the UW faculty from Pepperdine University where she taught for four years. Francis’s research sits at the intersection of American politics, race, constitutional law, and history.

Francis just published her first book Civil Rights and the Making of the Modern American State (Cambridge University Press, 2014).  The book explores the NAACP’s campaign against racial violence in the first decades of the 20th century. Francis’s research brings the political work and the voices of African Americans out of the shadows and into the forefront of how to think about political and constitutional development. The NAACP’s campaign to end racial violence provides compelling evidence that political institutions can sometimes respond to popular demands.  Put simply: Institutional development derives from the tension between powerful actors and those with less power who are able to organize effectively to challenge existing conditions.

When asked why she decided to focus on the NAACP’s early campaign against racial violence, she answers: “By mistake! I never imagined I would write this book, but as I spent more and more time in the NAACP archives at the Library of Congress, I found myself piecing together an exciting story that I had never heard about in all of my studies:  The NAACP fought for the right to live without threat of racial violence before the organization fought to end segregated education. I was blown away and came to realize that the expertise of the NAACP, which allowed it to play the role it did during the Brown era of civil rights, was developed by a series of earlier events.”

Francis is now working on a second book that examines the role of the criminal justice system in rebuilding southern political and economic power after the Civil War. In particular, Francis examines the use of chain gangs and leased prisoners as workers, and explores how the demand to replace slave labor drove southern criminal justice practices after Reconstruction. Francis explains, “Many people ignore the role of African American convict and chain gang labor in industrialization and modern capitalism at the end of the 19th century. It’s not simply that African American labor was abused via the criminal justice system during Jim Crow as many have documented, but that the pattern began long before.” Ultimately, Francis’s project views the growth of southern criminal justice as directly tied to the strengthening of the South in national politics and critical to replenishing southern state economies.

Francis is eager to start teaching and working with UW students. Her favorite classes to teach include American Politics, Race and Politics, and Civil Liberties. In addition, Francis will launch a new speaker series this academic year that focuses on American Political Development. According to Francis, “the goal of the speaker series will be to highlight and to build upon a huge departmental strength, and to engage outside scholars in the exciting work being done at UW.”