Professor Peter May Retiring after 35 Years 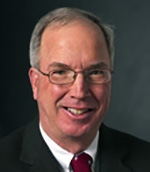 After serving 35 years on our faculty, Professor Peter May will be retiring at the end of Autumn Quarter.

Prof. May’s importance to our department is difficult to overstate.  He has been a prolific and influential scholar, a model teacher, and tremendously effective as an institution builder.  He has taught a variety of our core classes and been a much loved and appreciated graduate mentor.  His consistent success in attracting outside grant money supported his research and helped the professional development of many of his students.  Peter also served effectively in a variety of important leadership roles for the university and department, most recently as department chair from 2010 to 2014.  He has been a model colleague to faculty and staff.

Professor Peter J. May joined the Department after completing his PhD at UC Berkeley in 1979.  He was promoted to associate professor in 1985 and full professor in 1992.  He was named the Donald R. Matthews Distinguished Professor of American Politics in January 2010.  He also has held an adjunct appointment with UW Evans School of Public Affairs.  He has been a visiting scholar at the U.S. Department of Interior, a senior Fulbright Scholar and Visiting Fellow at the Australia National University, a visiting professor at Aarhus University, Denmark, and a visiting professor at the University of Hong Kong.  He was elected a member of the Washington State Academy of Sciences in 2012.

Peter May’s research addresses policy processes, environmental regulation, and policymaking for natural hazards and disasters.  His research about policy processes places him among the leading scholars in the field.  He has pioneered research addressing policy design and implementation, the coherence of policies, policy learning, and policy regimes.  His research on environmental regulation has addressed different approaches to environmental management, accountability issues posed by different regulatory regimes, and a variety of studies of regulatory enforcement and compliance.  He is also noted for his research on policymaking for natural disasters and hazards.  His book on the politics of and policymaking for disaster relief is one of the classics in the field.  Other research contributions include studies of earthquake risk reduction policy and politics, and studies of environmental planning for hazard reduction.  He has authored or co-authored four books:  Recovering from Catastrophes: Federal Disaster Relief Policy and Politics; Disaster Policy Implementation; Environmental Management and Governance: Intergovernmental Approaches to Hazards and Disasters; and Making Governments Plan: State Experiments in Managing Land Use.  He has authored more than 60 refereed articles in leading journals in public policy and public administration, some 40 book chapters and reviews, and a dozen research reports.  He received the 2012 APSA Public Policy Section’s Theodore Lowi Award for the best article in the Policy Studies Journal and the 2005 American Society of Public Administration’s William E Mosher and Fredrick C. Mosher Award for the best article in the Public Administration Review.

He has received funding totaling over three million dollars as a PI or Co-PI for 11 NSF grants, as PI for five grants from a NSF-funded Research Center at UC Berkeley, as a PI for grant from the US Environmental Protection Agency, two grants from the United States Geological Survey, and Ford Foundation funding for a workshop at their Bellagio Center.  He has participated in other funded research projects in Australia, Denmark, and New Zealand.  He has regularly served as an advisor to governmental agencies that include service on panels for the National Research Council and the National Science Foundation.  He currently is on the federal advisory committee for the National Earthquake Hazards Reduction Program and the International Advisory Committee for the Danish National Centre for Social Research.  He has served on the editorial boards of eight leading journals among his respective areas of research.

May has taught undergraduate and graduate courses addressing American politics, bureaucratic politics, environmental regulation, public policy processes, policy analysis, risk politics, and quantitative methods.  He was particularly committed to graduate education.  He was a recipient of the 2012 University of Washington’s Marsha L. Landolt Distinguished Graduate Mentor Award (receiving honorable mention for this award three times) and also was a recipient of the 2014 APSA Policy Section’s Excellence in Mentoring Award.  He has supervised dissertations of a number of graduate students who have gone on to successful academic careers or other notable accomplishments.  Many of these individuals have subsequently advanced through the academic ranks and are established scholars in the field of policy processes.  These include a number of graduate students who came to the University of Washington as Donald R. Matthews Graduate Fellows.  His mentoring includes contributions to PhD workshops in Australia and Europe.  He helped create and lead in 1996 a NSF-funded faculty development initiative, “Enabling the Next Generation of Hazards Researchers,” that has subsequently had four different cohorts of faculty participants from across the country.  Peter also introduced many graduate students and faculty colleagues to the joys of sailing on Lake Washington.

Professor May’s contributions to graduate mentoring in the department will continue long after his retirement.  He provided younger colleagues with both a model of how to be effective as a mentor and a great deal of practical advice on graduate instruction.  There is also an endowed fund set up in his honor that provides financial support for graduate students in political science.

Peter has made a lasting mark in numerous ways through leadership and service to our Department.  He has been a major contributor from the outset to the success of the Center for American Politics and Public Policy and has been active in the creation of the Center for Environmental Politics.  He has served a variety of roles in the department, including service and leadership of the graduate admissions committee.  He has also had numerous other committee roles within the College and University.  His recent term as chair was remarkably successful in developing faculty and classroom initiatives and in improving outreach to our alumni.

In the future, Peter plans to remain involved in a variety of advisory and scholarly activities while changing the pace and focus so that he can travel and pursue other interests.  He looks forward to working in the background to help to build future vitality and success for the Department.