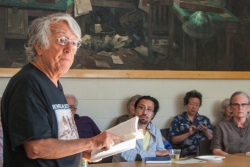 For his current research project and learning community entitled “Rethinking Prosperity” (www.rethinkingprosperity.org), Prof. Lance Bennett (Professor of Political Science and the Ruddick C. Lawrence Professor of Communication) invited the founder and director of Alternative Radio (AR, http://www.alternativeradio.org/) David Barsamian to discuss capitalism and the environment as well as the role the media plays in this context. Barsamian joined Bennett and a diverse, intimate, and lively audience of faculty, students, and community members on May 19th.

Arguing that we have not been good stewards of the earth because of the dominance of the profit motive, Barsamian emphasized that we are heading towards an iceberg of environmental crisis and catastrophe—a collision course comparable to that of the Titanic. Thus, radical action is required to change the course. And in this process the media, he noted, is not staining itself with glory. Instead of informing us about serious topics, such as going to war in Iraq and Afghanistan, we can only trust the media to sell us products. By excessively reporting on topics, such as the Patriots’ deflated footballs, the media functions as a weapon of mass distraction from what is really important, Barsamian argued. The range of opinions reported in the media goes from A to B, not A to Z. Due to the lack of debate and opinions in the media, it is the job of alternative media to create alternative narratives and spaces for dialogue. The change that is needed, Barsamian told the audience, has to come from the bottom. It is the media consumers themselves who have to connect the dots because the media will not do it for them. After his presentation, a lively discussion ensued.

Alternative Radio is an independent weekly public affairs series based in Boulder, Colorado. It is broadcast on over 175 radio stations in across North America. On his radio program, Barsamian has interviewed Noam Chomsky, Tariq Ali, and Edward Said, among others.

Rethinking Prosperity is Prof. Bennett’s and the Center for Communication & Civic Engagement’s (CCCE) newest learning community attracting faculty and students from several departments, as well as engagement from community organizations. The idea began as a spinoff from a series of courses Prof. Bennett has offered in the past few years on the conflicts between economic growth, consumerism, and the environment. To learn more about the project, check out the project website: www.rethinkingprosperity.org.

Barsamian on Capitalism vs. the Environment | Rethinking Prosperity