Prof. Parker: If Goldwater can win the GOP nomination, why not Trump? 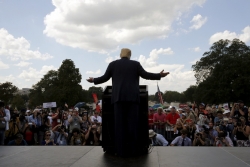 In theconversation.com, Professor Christopher Parker discusses the possibility of Donald Trump winning the GOP nomination, comparing him to the unlikely candidate Barry Goldwater.

"As in Goldwater’s case, few gave Trump much chance to win the nomination when he announced his candidacy just over two months ago. Some still consider him a long shot. The establishment has its candidate and, like Goldwater, Trump continues to say things that cause mainstream conservatives to pause – all while gaining momentum and setting the agenda.

Also like Goldwater, Trump can win the nomination with the backing of a committed faction of activists animated by the fear that “their” America is slipping away. Illegal immigrants are taking American jobs and committing crimes of all kinds, including rape and murder, he says. Trump, like Goldwater, promises to rescue America through the restoration of law and order."