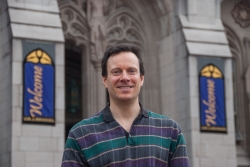 In an article discussing whether there is a culture war in America that is pitting religion and science against each other, staff writer Molly Jackson cites UW Political Science Professor Mark Smith among other scholars as well as recent public opinion surveys. The just released Pew Research Center survey of religion and science, for example, "suggests that the idea of a faith-based culture war is more overhyped media creation than a daily dilemma real people face."  The survey results are in line with Prof. Smith's findings, which he recently published in his newest book Secular Faith: How Culture Has Trumped Religion in American Politics. In the book, Jackson notes, Smith argues that "Americans of all stripes agree far more often than they disagree, despite what increasingly ideological media outleets would have us believe." Thus, the research of the Pew Research Center and Prof. Mark Smith point towards the conclusion that Americans are not in a culture war with each other.

The article entitled "Is religion vs. science a real divide among Americans? Not so much, says poll"  was published in The Christian Science Monitor on October 22, 2015.