Beyond “I’m Just a Bill On Capitol Hill”: Meet the Award-Winning Legislative Explorer 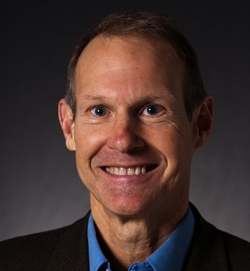 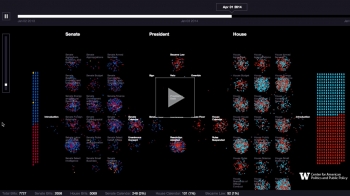 The cartoon short “I’m Just a Bill on Capitol Hill” has endured since 1976 as the leading pop-culture account of the lawmaking processes in the United States Congress.   Now, an award-winning research and website project headed by Professor John Wilkerson is bringing Congress’s ever-complicated lawmaking process into the digital age.  His new website for Legislative Explorer, or LegEx, provides a powerful research and data visualization tool that aims to improve public understanding of the congressional obstacle course.  Visitors to the website can view and create animations that illustrate the fate of 275,000 bills introduced since 1973.   Wilkerson developed the site in collaboration with Political Science graduate student Nicholas Stramp and the Seattle-based design studio Schema.

The user-friendly site is designed for the general public, according to Wilkerson.  Users can click a play button to watch animations of thousands of bills, illustrated as small squares of color that move through committees and other stages toward enactment as laws.  Just as in the old cartoon, only a small percentage of bills make it to the final destination of becoming a law.  Users can also set custom parameters to sort by topic or track bills introduced by their own representative in Congress.  The website is visually striking and fun to use, but it is also a powerful research tool.  Each of the colored dots can be clicked to reveal the name of the bill and links to its full text and other information.

LegEx has received national news coverage (including in the Washington Post) and numerous recognitions.  Fast Company magazine named the site one of the 18 best info-graphics of 2014, featuring it as a “stellar examples of the power of data visualization” in an article titled “What the hell does Congress do all day?.” LegEx also won an award of excellence in interactive design from  Communication Arts, an international trade journal of visual communications.  Recognition for LegEx follows the striking success of Wilkerson’s earlier online educational project, the LegSim website that is used for classroom simulation of Congress in high schools and universities throughout the country.

While the LegEx website is designed as a fun and accessible tool for civic education, it developed out of a more scholarly research project on Congress. With funding from the National Science Foundation, Wilkerson developed a large new database of information on congressional activity (www.congressionalbills.org). The database organizes data from a wide variety of sources, including diverse official records of the Library of Congress and datasets developed by other political scientists.

Wilkerson’s development of these information tools reflects his dedication to data-driven discovery of the congressional process.  According to Professor Wilkerson, LegEx developed as a tool for a “public that is very critical of Congress, but knows very little about what Congress actually does.”  He also notes, “There's lots of information out there about Congress, but it's not easily accessible to the public. The hope was that Legislative Explorer would help people to better appreciate the complex and fascinating institution that researchers study.”

More specifically, the dataset makes it easier to track broad patterns over time, giving Professor Wilkerson and other scholars an accurate check on more impressionistic accounts of congressional performance.  For example, Wilkerson’s recent book Congress and the Politics of Problem Solving (with co-author Scott Adler) uses the new dataset to demonstrate that Congress is more productive and much more focused on problem-solving than news media accounts suggest.

The LegEx project is a great illustration of the way new computing and storage technologies create opportunities for innovative “Big Data” projects that can improve scientific understanding.   Professor Wilkerson has emerged as a national leader among political scientists who are starting to use computational and big data approaches to analyzing political texts.  He is currently at work on a Policy Ideas Project that uses plagiarism-detection software to track how ideas evolve over time in congressional policy proposals.  Wilkerson’s commitment to develop tools for public education and evidence-based discovery will continue to improve both scholarly and public understandings of government processes.