And the 2015 Department Graduate Research Grants Go to… 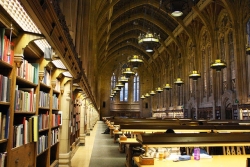 The reading room in Suzzallo Library

The Department of Political Science offers various research grants for its graduate students. In December 2015, the department chair Prof. George Lovell announced the winners of the 2015 Department Graduate Research Grants.

The 2015 Camden Hall Graduate Research Grant was awarded to Andreu Casas Salleras and Nora Webb Williams for their project “Images that Matter: Online Protests and the Mobilizing Role of Pictures.” The project addresses the question how images that are shared online impact social movement participation. Casas Salleras and Williams seek to provide empirical evidence to support the argument that ‘online image-sharing’ increases the likelihood of a social movement to spread. The Camden Hall Graduate Research Grant, which covers expenses related to research on topics in American politics and constitutionalism, will allow them to hire undergraduate students as coders to assist in manually labeling images sent on Twitter during a 2015 Black Lives Matter protest.

Elizabeth Chrun received the 2015 Ione E. Curtis Graduate Research Grant for her dissertation entitled “Fighting Corruption: The Emergence, Design and Efficacy of Anti-Corruption Agencies.” Chrun’s dissertation studies institutional failure in the context of corruption in advanced democracies. Specifically, she will focus on anti-corruption agencies (ACAs) examining the conditions under which they are established, the contributing factors that explain their wide structural diversity and the conditions under which they are effective. To undertake this research, Chrun relies upon both statistical content analysis and comparative case study methodologies. The Ione E. Curtis Graduate Research Grant, which pays for expenses related to research in any field of political science, will allow her to conduct her fieldwork in Quebec, Canada.

The 2015 David J. Olson Graduate Research Grant winners are Erin Adam and David Lopez. The grant covers expenses related to research on regional governments and subgovernments or research related to work or the politics of labor.

Erin Adam’s project is entitled “Legal Mobilization at the Margins: Queering Rights through Intersectional Coalition-Building in LGBT and Immigrant Communities.” Adam explores the formation of LGBTQ, Latin@, and immigrant rights group coalitions in Washington State and Arizona. While these groups have been divided in the past, they began to unite in the mid-2010s. Relying upon a sociolegal research framework, in-depth interviews and a series of participant observations, Adam seeks to answer why they began to unite. The David J. Olson Graduate Research Grant will enable her to cover interview transcription costs as well as conduct further interviews.

David Lopez’s research project addresses “The Political Foundations of Stability and Change in Compulsory School Systems.” This project explores why education reforms trigger contentious politics in some countries while reforms in other countries largely go unchallenged. As part of a broader dissertation agenda, Lopez’s project situates public education systems as arenas of political and social conflict between civil society, providers, and the state in which groups compete for authority over schools. By extension, changes in patterns of authority over compulsory schooling map on to broader political developments in important ways. The David J. Olson grant will support fieldwork in Chile where David will conduct extensive interviews with key actors across the educational spectrum such as teacher union organizations, state education bureaucrats, and political elites at the national and sub-national level.

The 2015 Peter May Graduate Research Grant, which covers expenses related to research in any field of political science, goes to Crystal Pryor for her project titled “The Bureaucratic, Technological, and Psychological Sources of Strategic Trade Controls.” Her research examines when states implement similar controls on the export of sensitive technologies. Preventing the spread of WMD and destabilizing accumulations of militarily useful technologies depends on states practicing export controls in a like manner. The Peter May Graduate Research Grant allows Pryor to access trade databases and a critical trade journal as well as request a custom Census Bureau report.