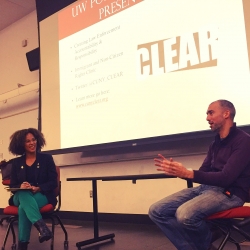 On February 19, 2016, Prof. Ramzi Kassem joined UW Political Science Professor Megan Ming Francis to discuss Guantanamo, Bagram, torture, and the Global War on Terror in front of a crowded room of 175 students. Kassem is an Associate Professor of Law at the City University of New York, where he directs the Immigrant & Refugee Rights Clinic and supervises the Creating Law Enforcement Accountability & Responsibility (CLEAR). According to the project’s website, CLEAR “primarily aims to address the unmet legal needs of Muslim, Arab, South Asian, and other communities in the New York City area that are particularly affected by national security and counterterrorism policies and practices.”

With his students, Professor Kassem has represented prisoners of various nationalities presently or formerly held at American facilities at Guantanamo Bay, Cuba, at Bagram Air Base, Afghanistan, at so-called "Black Sites", and at other detention sites worldwide. In connection with these cases, Professor Kassem and his students have appeared before US federal district and appellate courts, as well as before the military commissions at Guantanamo. Kassem was candid in his explanation of the dire conditions his clients faced, at one point in his talk Kassem noted:

“We had clients, who faced mock executions, simulated drowning, who were hung by their arms for hours, who were forced to stand in painful positions (so called stress positions) for hours, who were beaten up. And I’m just talking to you about the physical forms of torture, which by the way—and this might surprise you—[…] without a single exception all the men will tell you that the most painful form of torture is not the physical torture, it’s always the psychological torture—it’s always sensory deprivation, solitary confinement for months, etc..”

Furthermore, the expert on national security law and counterterrorism policies pointed out that “debates between would-be politicians about who would be the better torturer-in-chief [are] particularly perverse” especially at the national level. Not only is torture ineffective, which is “a self-centered, utilitarian argument about what is better for us”; but the more important argument to him is the “humanistic argument about how inhuman and monstrous it is to treat other people that way and to inflict torture on other people.”