“Why Bernie will burn out in Dixie” – Prof. Christopher Parker on Democratic Primary Race 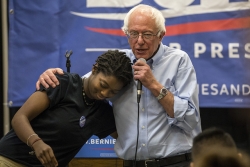 Political Science Associate Professor Christopher Parker recently shared his take on the prospects of presidential candidate Bernie Sanders in the Democratic primary race on The Conversation website. While some Bernie backers believe he still has a chance—after all he trails Hillary Clinton only by one pledged delegate—, Parker is convinced that Bernie cannot win the nomination “because black people won’t vote for him.” He notes:

On “Super Tuesday,” March 1, seven of the scheduled contests will take place in southern states: Alabama, Arkansas, Georgia, Mississippi, South Carolina, Texas and Virginia. […] I predict that, in these southern states in which the black electorate is twice the size it is in Nevada, Bernie will get blown out.

To underscore his argument, Parker cites three reasons for why Super Tuesday will not be “super” for Bernie Sanders. First, history has taught blacks to be wary of “white folks making promises,” which does not bode well for Sanders and his “pie-in-the-sky” appeals to black voters. In addition, though Sanders appeals to young black voters, young people are generally less committed to politics. Finally, Parker contends that Senator Sanders “reduces race and racism to class,” which is too simplistic as race is a “salient identity among blacks.” Clinton, on the other hand, “addresses sources of racism, deploring white privilege and continuing bigotry,” which “should give her the advantage among black voters.”

Professor Parker’s article “Why Bernie will burn out in Dixie” was published on The Conversation website on February 25, 2016.

The Conversation is a collaborative effort among academics in a wide spectrum of fields to provide informed news analysis and commentary that is free to read and republish. The Conversation launched in Australia in March 2011, in the UK in May 2013, and in the United States in October 2014 as an independent news source that allows the research community and the public to engage with one another directly. The aim of the project is to rebuild trust in journalism, to increase the quality of public discourse, and to promote better understanding of current affairs and complex issues.