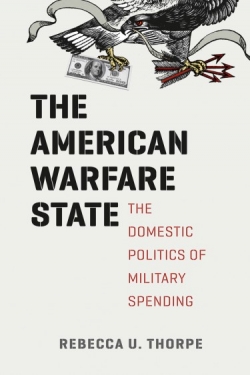 UW political scientist Rebecca Thorpe’s book “The American Warfare State: The Domestic Politics of Military Spending,” has been honored by the Lyndon Baines Johnson Foundation — the second award the well-received book has earned.

The LBJ Foundation is a nonprofit organization that supports the LBJ Library and LBJ School of Public Affairs at the University of Texas at Austin. Thorpe has been chosen winner of its 28th D.B. Hardeman Prize, given annually to the best book on the U.S. Congress from the fields of biography, history, journalism and political science.

In an interview with UW Today in 2014 Thorpe, an assistant professor of political science, said the book seeks to address “the issues of American empire and institutional failure by asking why a nation founded on a severe distrust of permanent armies and centralized power developed and perpetuated the most powerful military in history.”

She added, “I wanted to know why it is that the U.S. spends more on the military than every other item in the budget added together, with the exception of entitlements like Social Security and Medicare. Even with the wars in Iraq and Afghanistan winding down, Congress still continues to allocate nearly as much money for the military as every other country in the world — combined.”

Hardeman, for whom the prize was named, was a longtime assistant to Sam Rayburn, a legendary Democratic Speaker of the House of Representatives and collector of books about Congress. Books are judged on scholarship, literary craftsmanship, originality, depth of research and contribution to the public’s understanding of Congress.

The selection committee for the prize included Tom Daschle, former U.S. senator from South Dakota, as well as scholars from the University of Texas and University of Houston and representatives of public policy institutions. Thorpe will receive the award, which comes with $10,000, in a ceremony April 28 at the LBJ Library in Austin, Texas.

The prize is the second major honor for the book, which also won the Richard NeustadtAward for the best book on the presidency from the Presidents and Executive Politics section of the American Political Science Association. Neustadt was a political scientist and special assistant to President Harry Truman.

Speaking of the LBJ Foundation award, George Lovell, chair of the Department of Political Science said in an email to colleagues, “This second award is for best book on a different branch of government, and from a committee that included both leading scholars and important political practitioners. It is thus a particularly important achievement that reflects the exceptional quality and range of Prof. Thorpe’s book.”

Thorpe is in good company with the LBJ Foundation honor; a previous recipient, in 2002, was Pulitzer Prize-winning author Robert Caro, for his book “The Years of Lyndon Johnson: Master of the Senate,” the second volume in his masterful — and ongoing — series of books about Johnson.

“The American Warfare State” was published in 2014 by The University of Chicago Press.