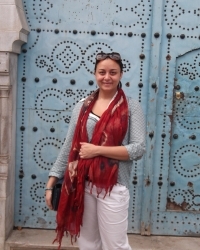 UW Political Science doctoral student Hind Ahmed Zaki recently published the article “Tunisia uncovered a history of state sexual violence. Can it do anything?” in the Washington Post. In the article, she discusses part of her dissertation work, which addresses sexual violence in Egypt and Tunisia as well as its politicization in the wake of the Arab spring. In particular, the article addresses the long history of “systemic sexual violence at the hands of state agents” that thousands of Tunisian women have suffered from and the recent establishment of the so-called Truth and Dignity Commission, which “has empowered many of these women to seek legal remedies and public recognition of those crimes.” Since the commission began its work in 2014, it has heard the “testimonies from more than 20,000 victims” painting “an ugly picture of the state’s systemic use of sexual violence against female members of the opposition and female relatives of opposition members.” For her dissertation research, Ahmed Zaki interviewed members of the Truth and Dignity Commission, political activists and women who filed their cases before the commission. Relying on these interviews as well as an analysis of available government archives, she concludes: "While the commission’s work is far from complete, it could represent a rare opportunity to push forward new rights claims for Tunisian women that move beyond the secular/Islamic division and provide symbolic justice for Tunisian women."

The commission, however, is facing procedural and political challenges that Ahmed Zaki addresses in the article, including a lack of real political power. Furthermore, she discusses the issue of gender justice in the context of the democratic transition focusing on the question how the fragile state of the Tunisian political system has impacted the work of the commission, which leads her to the following conclusion:

Though the democratic transition exposed the extent of the state’s past use of gender-based violence for political motives, its failure to clearly address the issue risks the reproduction of these same traditional and hegemonic gendered categories. […] The Truth and Dignity Commission will have to establish strong popular support to counter the diminished political will to address past grievances and open new venues for gender justice.

The article was published on April 11, 2016, on the Washington Post’s Monkey Cage blog, which covers political science research and relies upon it “to make sense of the circus that is politics.”