Prof. Christopher Parker discusses “Why Donald Trump could be good for America” on KUOW 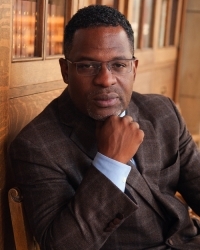 On April 28th, 2016, UW Political Science Professor Christopher S. Parker shared his thoughts on “why Donald Trump [becoming the GOP presidential nominee] could be good for America” with KUOW’s Bill Radke. After noting that Professor Parker predicted Trump’s rise early on while most commentators “were writing off Donald Trump as a joke,” Radke inquired why Parker believes that having Trump as the Republican presidential candidate could be a good thing for America. In his response, Prof. Parker elaborates on the history of racism and racial language in America and notes, “the bigotry with which [Trump] speaks has been a part of American politics for a very long time.” Yet, despite the decline of “old fashioned racism” and the rise of political correctness and racially coded language in the 1960s and 1970s, “Trump is not using racially coded language; he is very upfront and very frank about his bigotries,” Parker argued referring among other things to Trump’s comments about immigrants, Muslims, and women. Therefore, his candidacy can serve as “a teachable moment” because “it brings these bigotries and biases to the surface,” Parker notes. When Radke inquired how Parker hopes people would respond to Trump so that his candidacy can be turned into something positive, Parker explained:

[People need] to further interrogate his message […]. What I would like is for there to be a more sustained discussion over intolerance and bigotry; for straight, white men to recognize that this country belongs to more than them. This country belongs to all of us who consider ourselves Americans. And to have a really substantive discourse; and for them to understand some of the things that we—and I’m a black man—go through on the day-to-day; and for them to be more sympathetic and beyond that for them to support policies that try to mitigate the harm that has been done to people from marginalized groups […].

You can listen to the 6-minute segment, on the KUOW website.