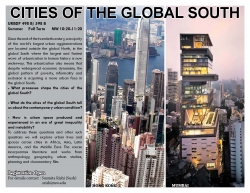 Cities of the Global South
URBDP 498B/598B: CITIES OF THE GLOBAL SOUTH
Summer Full Term
MW 10:20-11:20
REGISTRATION OPEN
Since 2009, for the first time in the known history of the human race, the global urban population has overtaken rural population, and this trend is likely to continue for at least the next four decades. In this time, while the world population is set to grow by 2.3 billion, urban population is set grow by 2.9 billion and most of this growth will take place in the cities of the global South. With this urban growth will come a shift in practices and processes of living, and a further accelerated urbanization. The rate of urbanization is and will continue to be the fastest in the least urbanized areas of the world. Since the end of the twentieth century, a majority of the world's largest urban agglomerations are located outside the global North, in the global South. However while being similar, cities in the global South are also varied in their experiences with consequences and patterns of urbanization.

This course aims to embrace the complexity and ambiguity that is the city in the Global South and help students become familiar with its numerous urbanities and urbanisms.  Drawing on conflicting contributions and profiling divergent debates, this course will address but not be limited to the following topics:

This will be a mid-level course appropriate for students with no background in Global South studies, as well as for those seeking to better understand the region’s urban environments and landscape in the context of recent globalization and rapid historical changes.