Prof. Parker explains “Why Obama will have the last laugh” on TheConversation.com 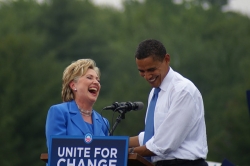 In a recently published article on TheConversation.com, UW Political Science Professor Christopher S. Parker explains “why President Obama will have the last laugh.” Prof. Parker argues that “the president and other progressives will continue to share bemused laughter at the expense of the Republican Party” long past this year’s White House correspondents’ dinner because by the end of January 2017, President Obama whose election has triggered a lot of “anxiety and anger,” which the “GOP harnessed […] to reclaim both chambers of Congress,” will leave the political arena. In conjunction with that, Parker notes:

Now, with the object of their derision leaving office, the disaffected have turned their attention to the establishment, creating the space in which Donald Trump has successfully parlayed rank bigotry into front-runner status.

Thereafter, Prof. Parker addresses Donald Trump’s chances of winning this year’s presidential election contest, the effect that his candidacy could have on the concurrent Senate elections as well as the consequences that a Republican loss in both would have on the Supreme Court and beyond.

The article entitled “Why Obama will have the last laugh” appeared on TheConversation.com on May 13, 2016. The Conversation is a collaborative effort among academics in a wide spectrum of fields to provide informed news analysis and commentary that is free to read and republish. The Conversation launched in Australia in March 2011, in the UK in May 2013, and in the United States in October 2014 as an independent news source that allows the research community and the public to engage with one another directly. The aim of the project is to rebuild trust in journalism, to increase the quality of public discourse, and to promote better understanding of current affairs and complex issues.