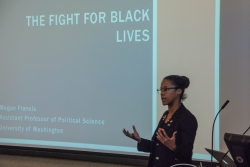 Political Science Professor Michael McCann, who also serves as the director of the Harry Bridges Center for Labor Studies, addressed the issue of police violence noting that the “policing of black and brown bodies is a constant of American history.” Nevertheless, McCann pointed out, it was not until the 1991 Rodney King case that police brutality became an important part of the public discourse. King, a Los Angeles taxi driver who was beaten by four LAPD officers following a car chase, became a national symbol for excessive police force against minorities. The acquittals of the police officers involved in the incident led to the 1992 Los Angeles riots. In addition to causing public outrage and protests, McCann argued, the police’s use of excessive force “undercuts [its] greatest power,” namely the public’s trust. So why do the police engage in excessive force? According to McCann, using excessive force is a temptation for the police simply because it has the ability and equipment to do so. “Over the last 30 or 40 years,” he noted, “the capacity to mobilize force has changed dramatically.” In particular, McCann discussed the rise of militarized policing. The conflation of military activity and policing began in the late 1970s and early 1980s. It was then, he explained, that the police began to rely increasingly upon military weapons discarded from the Vietnam War as well as military language, uniforms, training and protocols. Overall, McCann concluded, these developments led to a changing relationship between the police and the citizens they are tasked to protect and the increasing normalization of state violence broke down a capacity for trust that is difficult to repair.

Following Professor McCann, Political Science Professor Rebecca Thorpe discussed mass incarceration, which shedefined as “comparatively and historically extreme rates of imprisonment.” While United States incarceration rates were on par with other Western democracies in the 1900s, Thorpe noted, a dramatic shift took place in the 1970s. ”From 1970 to today, [the] imprisonment rate increased 700 percent” making the US the largest jailor in the world as it imprisons half a million more people than China, which is four times its size population-wise. And what is more:

US imprisonment rates are not only unparalleled in both a historical and a comparative perspective, but they also disproportionally target the most socioeconomically marginal and disadvantaged among us, including the mentally ill, the illiterate, the drug addicted, the poor, and young black and Hispanic men living in neighborhoods characterized by concentrated disadvantage.

Thus, the system of mass incarceration, Thorpe argued, is a “new system of institutionalized racism,” that replaced slavery and institutionalized segregation.  But where does this system have its roots? An increase in crime is cited as a common response to this question. However, this answer does not explain why imprisonment rates did not decline when murder rates went down in the 1990s. Instead, Thorpe maintained, it has a lot to do with politics. The criminal justice system has become more punishing and punishing has become more severe “in the wake of the civil rights movement” and during “a [simultaneous] period of deindustrialization, which [in turn] created a job crisis.” So how can we break this cycle? There are several factors that indicate that this may be a crucial moment for prison reform—social movements seek changes, states are under fiscal pressure, and public opinion has shifted. But according to Thorpe that is not enough. Given that prisons provide a stable source of revenue for poor and economically desperate rural communities, we need to address the economic disadvantage that fuels the rural prison building boom and social movements must also address the underlying sources of disadvantage that shape our criminal justice movement.

Finally, Political Science Professor Megan Ming Francis addressed the role of protest movements. She began her presentation by noting that while racial violence is one of the biggest issues in American politics at this time, the role that Black agency plays through Black freedom organizations in shifting political and legal institutions is not given enough attention, which she seeks to change. Thus, she asked three key questions: 1) Does protest matter? 2) Can people on the ground shift institutional structures? 3) How should we understand the history of protest around black lives? Drawing on the case of the NAACP’s campaign against racial violence, Francis argued that protest does matter a lot and that people on the ground can shift government structures. Regarding her third question, she noted, that we need to understand the civil rights protest movements from reconstruction until today. The history is not linear—there are pushes and pulls at different times. And while the NAACP did not accomplish everything it wanted in its campaign against racial violence, its actions did decrease violence and politicians started paying attention. In conclusion, Francis emphasized that “protest is necessary to change things,” yet at the same time protest on the street is not enough to change government structures. Therefore, protest must be connected to working with the government.