Understanding the Role of Religion in American Politics 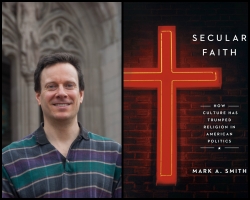 According to conventional wisdom, organized religion has long been a powerful and conservative influence on American politics. Professor Mark Smith’s new book, Secular Faith: How Culture has Trumped Religion inAmerican Politics, develops a startlingly original and compelling alternative perspective. Instead of looking at whether religion leads people to favor certain policies or vote for particular candidates, Smith explores how public opinion influences the political positions and doctrines of religious organizations. Smith explains that the book developed out of a fairly straightforward observation: “In a diverse country like the United States people choose which religious community, if any, to join. If people choose where to devote time, money, and commitment, religious leaders cannot compel their followers to adhere to specific doctrines and beliefs.”  This insight about choice in religious affiliation leads Smith to explore new questions about the role of religion in politics.

The book focuses on several episodes in US history when religious organizations switched positions on important public policy issues. Such shifts are visible today on issues like marriage equality. Smith also shows how similar shifts have happened across US history on issues such as slavery, divorce, women’s rights, and abortion. Smith explains: “As new values emerge in society, religious leaders often update their groups’ official positions to maintain support among the rank-and-file. Among Protestants and sometimes even among Catholics, these processes of change center around reinterpreting the Bible.”

Smith’s findings also challenge the common view that American society is divided by an intractable “culture war” among people with different foundational moral beliefs. Smith takes a long-term perspective and identifies convergence rather than division as the enduring theme. “In the long run, Christians take many of the same political stances as atheists and other non-Christians.” Smith also notes, “Such a claim might seem controversial at first, and so I try to document it by analyzing a large amount of historical material, denominational statements, public opinion polls, and other kinds of data.” The historical record leads Smith to conclude, “The metaphor of a culture war exaggerates the actual amount of conflict in American politics. Yes, Americans are split over several high-profile issues, but we agree on much else. For example, nobody in America today is pushing to criminalize blasphemy, outlaw alcohol production, or ban commerce on Sundays—and yet those religiously based conflicts were all prominent earlier in American history.”

Smith’s conclusions run counter to conventional wisdom about religious organizations determining politics and a permanent culture war. Nevertheless, Smith ultimately does not think the conclusions should be difficult to believe. “After all, the ordinary members of the religious groups live in the larger society and absorb its cultural influence through institutions like the media, schools, neighborhoods, and the workplace. Much of Secular Faith revolves around the common influences that affect people of differing religions, as well as people holding no religion at all.”

The book, Smith’s third, is one of several notable recent books by Political Science faculty. Two other faculty members received multiple national awards this year for their first books. Professor Megan Ming Francis’s first book, Civil Rights and the Making of the Modern American State, won both the Ralph Bunche Award from the American Political Science Association (APSA) and the W.E.B. DuBois Award from the National Conference of Black Political Scientists. Professor Rebecca U. Thorpe’s The American Warfare State won both the Richard Neustadt Prize from the Presidency and Executive Politics Section at APSA and the D.B. Hardeman Prize from the Lyndon Johnson Foundation. Finally, Professor Lance Bennett won the Doris Graber Award from APSA’s Political Communication’s Section for his co-authored 2007 book, When the Press Fails:  Political Power and the New Media from Iraq to Katrina.