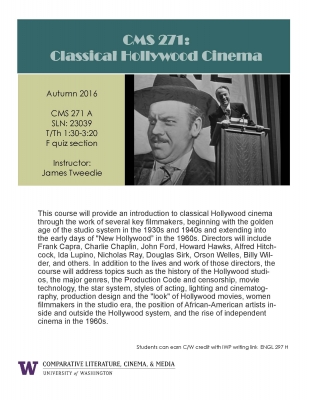 This course will provide an introduction to classical Hollywood cinema through the work of several key filmmakers, beginning with the golden age of the studio system in the 1930s and 1940s and extending into the early days of "New Hollywood” in the 1960s. Directors will include Frank Capra, Charlie Chaplin, John Ford, Howard Hawks, Alfred Hitch-cock, Ida Lupino, Nicholas Ray, Douglas Sirk, Orson Welles, Billy Wil-der, and others. In addition to the lives and work of those directors, the course will address topics such as the history of the Hollywood studi-os, the major genres, the Production Code and censorship, movie technology, the star system, styles of acting, lighting and cinematog-raphy, production design and the "look" of Hollywood movies, women filmmakers in the studio era, the position of African-American artists in-side and outside the Hollywood system, and the rise of independent cinema in the 1960s.