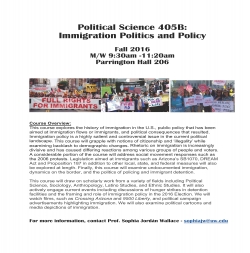 Course Overview:
This course explores the history of immigration in the U.S., public policy that has been aimed at immigration flows or immigrants, and political consequences that resulted. Immigration policy is a highly salient and controversial issue in the current political landscape. This course will grapple with notions of citizenship and ‘illegality’ while examining backlash to demographic changes. Rhetoric on immigration is increasingly divisive and has caused differing reactions among various groups of people and voters. A considerable portion of the course will address social movement responses such as the 2006 protests. Legislation aimed at immigrants such as Arizona’s SB1070, DREAM Act and Proposition 187 in addition to other local, state, and federal measures will also be explored at length. Finally, this course will examine undocumented immigration, dynamics on the border, and the politics of policing and immigrant detention.

This course will draw on scholarly work from a variety of fields including Political Science, Sociology, Anthropology, Latino Studies, and Ethnic Studies. It will also actively engage current events including discussions of hunger strikes in detention facilities and the framing and role of immigration policy in the 2016 Election. We will watch films, such as Crossing Arizona and 9500 Liberty, and political campaign advertisements highlighting immigration. We will also examine political cartoons and media depictions of immigration.