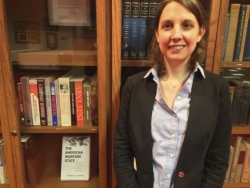 UW Political Science Professor Rebecca Thorpe was awarded this year’s Heinz Eulau prize for the best article published in the academic journal Perspectives on Politics in the past calendar year. The award is supported by Cambridge University Press. Professor Thorpe received the prize for her article “Perverse Politics: The Persistence of Mass Imprisonment in the Twenty-first Century,” which examines the political economy of mass incarceration. In the article, Thorpe argues that the economic interests of poor, rural areas interact with incarceration policies to create policy lock-in. Her careful empirical analysis suggests that prisons are located in poor rural areas because of the economic benefits they bring and that by providing a stable source of employment to rural and predominantly white communities, prisons play a distributive function that will make the carceral system resistant to reform. She notes:

Thorpe’s study brings original data to examine a novel argument of importance to the scholarly and policy debate. Though focused on the US, the argument is general in nature and is likely to resonate well beyond the US context.