What Now? Faculty Panel Discusses the 2016 Election & Its Aftermath 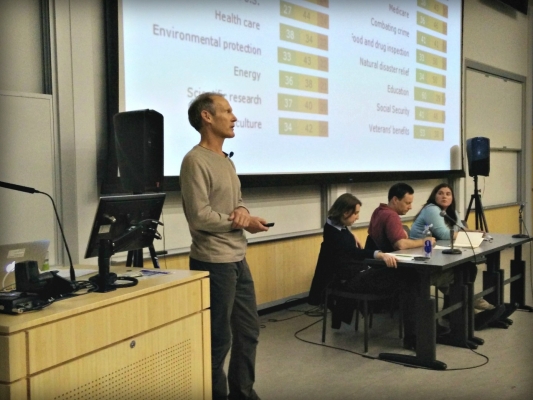 John Wilkerson Presenting the "Policy Implications of the 2016 Election" 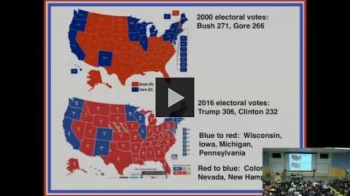 On November 16, 2016, four UW Political Science professors shared their insights on the 2016 election and its aftermath with a large audience of students and alumni. Professors Mark A. Smith, Rebecca Thorpe, Sophia Jordan Wallace and John Wilkerson discussed various aspects of the election with a particular focus on why Donald Trump won. Each of the four faculty members gave a short presentation.

Professor Mark A. Smith, who is an expert on American politics, interest groups, public opinion and religion, discussed “The Electoral College and the Trump Victory.” He addressed the question “why did Americans pick Trump to be the next president?” noting that it is ultimately the wrong question to ask because Trump was not picked by a majority of Americans. Not only are there a lot of non-voters, but the Electoral College also allows for the looser of the popular vote to win the election. To illustrate this point, Smith argues, it is critical to understand the role of so-called ‘wasted votes,’ i.e. everything above the one vote you needed to win a state’s electoral college votes. Ultimately, Smith argues, Trump won because he got the votes in the right places.

Professor Sophia Jordan Wallace, an expert in Latino politics and immigration policy, elaborated on “The Persistence of Race and Ethnicity in American Elections” arguing that race continues to be an important factor in voting. Overall, she notes, upwards of 80 percent of all minorities voted for Clinton and this election saw the “greatest amount of cohesion we have ever seen among Latino voters.” Thus, “support for Trump cannot be explained by economics and class alone.” Furthermore, Wallace discussed the issue of voter suppression given that this was the first presidential election after the Supreme Court decided Shelby County v. Holder, a decision that is generally viewed as a gutting of the 1965 Voting Rights Act. Considering the small margins of victory in some of the critical swing states, the various forms of voter suppression could have had a significant impact on the election outcome, Wallace said. Finally, she addressed immigration policy and the rhetoric around it.

Professor Rebecca Thorpe, whose research focuses on national political institutions, policymaking and American political development, posed the question “what can Trump actually do both domestically and internationally?” To answer that question, Thorpe addressed the president’s powers in her presentation. In particular, she discussed executive orders and their limitations. Thereafter, she went over specific policy areas and issues to consider what we should expect from a Trump presidency. Specifically, she talked about abortion, immigration, the border wall, the Muslim ban, same sex marriage, and national security policies. Referring to same-sex marriage, she noted that “it is very difficult politically to rescind rights that have already been granted.” And with regards to national security policies, Thorpe pointed out that the president has “enormous authority in the national security realm, far more than in the domestic realm.”

Finally, Professor John Wilkerson, whose research centers on legislative organization and decision-making, discussed the “Policy Implications of the 2016 Election.” Wilkerson argued that “this election was not just about Donald Trump […], this election also produced a unified Republican government and we’ve [only] had unified Republican governments for six years over the past 60 years.” Furthermore, he stressed the importance of Congress since “it is Congress that makes the laws.” Overall, Wilkerson made three key points: 1) “Americans are divided, but not as divided as we think”, 2) we should “expect big policy changes” and 3) “Republicans aren’t too worried about the 2018 elections, Democrats should be.” Looking ahead to the 2018 mid-term election, Wilkerson argues, Democrats are in a tough spot as they currently hold 25 of 33 Senate seats that will be up for reelection. Thus, in order to make any inroads, they would have to not only hold those seats, eight of which are in states that voted for Trump, but also gain some of the remaining seats currently held by Republicans, which might prove difficult. It also might be challenging for Democrats to pick up seats in the House as there are “fewer and fewer competitive districts.”

To learn more about this faculty panel, you can check out Andrew Chan’s summary of the event, which appeared in The Daily on November 17, 2016, or you can watch the recording.

Over the past few years, the department has hosted a series of these faculty panel discussions that have given University of Washington students new scholarly perspectives on important topics in today’s news headlines. The panels have allowed faculty members to bring their perspectives to bear on topics such as global environmental politics, the rise in incarceration rates in the United States, and the worldwide refugee crisis. The next faculty panel will be in Winter quarter 2017.