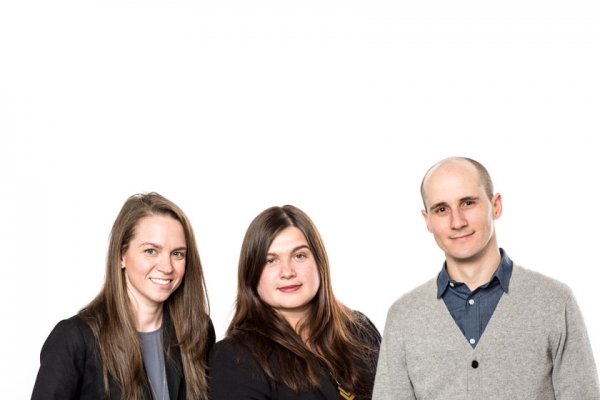 Caitlyn Ainsley joins the department as Assistant Professor. Ainsley received her Ph.D. in Political Science from Emory University in 2016, and spent the last year as a graduate fellow at Emory University’s Institute for Quantitative Theory and Methods. During Autumn quarter, Professor Ainsley is teaching an upper-level undergraduate course called “Strategy in Politics” as well as a graduate course on “Game Theory.” This Spring quarter, she will be teaching a course on the “Politics of Economic Policy.”

Ainsley’s research interests are in political economy, comparative political institutions, formal theory, and statistical methods.  More specifically, Professor Ainsley’s research focuses on the design of political institutions and how they structure decision-making and policy outcomes. Her current research looks in particular at the design of monetary institutions, the effect of international courts in economic integration, as well as theories of judicial and legislative bargaining and policymaking. She stresses that her research is very applied, noting “I devote a lot of time and effort to visualization and making results from seemingly complex models accessible and intuitive.”

She initially became interested in political economy when she was pursuing her undergraduate degree in economics during the onset of the financial crisis:

“I was fascinated by the economic side of the crisis, so I delved into understanding bubbles and the transmission of crises across national economies. I kept getting hung up, however, on the role or lack thereof for political actors and institutions in the canonical economic theories. My economics advisor ultimately sent me over to talk to the political economy group in the political science department, and that’s where I stayed.”

In her dissertation, she conducted a comparative study of central bank appointments, focusing primarily on how economic volatility and uncertainty affect appointments. Using both theoretical and empirical evidence, Ainsley challenges the conventional wisdom, which sees benefits to keeping politics out of monetary policy by delegating decisions to an independent central bank. Ainsley notes that the key result in her dissertation is that “in volatile economic environments in which the central bank faces high levels of uncertainty over future inflation, the government will appoint more inflation-tolerant central bankers, and vice versa.” Ainsley illustrates this finding by looking at a sample of four countries: Hungary, England, Sweden, and the United States.

Ainsley, who says she would have likely pursued a career in criminal justice reform if she had not become an academic, is excited to join the UW Political Science department and to be back on the West Coast where she grew up. Unrelated to her academic skills, she notes that she makes a mean frozen pizza and has never lost a game of Monopoly. And as an avid sports fan, she is also looking forward to cheering on the Huskies.

Our second new faculty member is Associate Professor Geoffrey Wallace. He received his Ph.D. in Government from Cornell University in 2010, and joins the UW faculty from Rutgers University-New Brunswick, where he taught from 2012 to 2016. In addition, Wallace was a visiting fellow at the Niehaus Center for Globalization and Governance at Princeton University during the 2013-14 academic year, and was a faculty member at the University of Kentucky from 2009 to 2012. Professor Wallace will teach courses on international law, international organizations, political violence, international conflict, and international relations theory.

Initially, Professor Wallace became interested in studying political science when he took a year-long “Introduction to International Relations” course as an undergraduate student at the University of Toronto. Knowing that taking this course was such a transformative experience for him “puts a lot of pressure onto [his teaching as he is] trying to at least instill a level of excitement into ‘Introduction to International Relations’ when I teach it now,” he notes.

Wallace’s research focuses primarily on international security and international law with a focus on the conduct of actors during armed conflict. While he began graduate school with a focus on environmental policy, the political events that took place at the time—foremost the Iraq War, the Abu Ghraib scandal and the creation of the Guantanamo prison—led him to discover a research gap in the area of detainee issues and the treatment of prisoners.

In various articles as well as in his first book, Wallace addresses these issues. His book Life and Death in Captivity: The Abuse of Prisoners during War was published by Cornell University Press in 2015. Drawing on the existing literature about the targeting of civilians, his research assesses which findings transfer over to the treatment of detainees. He concludes:

“If victory on the battlefield became more difficult […] and more protracted and the cost of fighting increased, that was generally associated with increased abuse against prisoners. […] [Furthermore,] when you are looking at belligerents who are trying to annex territory from the adversary, prisoner abuse is extremely high.”

His findings diverge from the civilian targeting literature, however, when considering the role of democracy and regime type. Democracies at war do not treat the enemy’s civilians the same way they treat enemy prisoners. While democracies are “willing to essentially trade off enemy civilians’ lives, you don’t find the same thing with the treatment of prisoners […] because they care about their [own] soldiers’ lives and reciprocity and retaliation is really high.” Thus, democratic countries try to ensure that their soldiers are treated well by treating enemy detainees well.

Currently, Wallace is working on his second book, which is “looking at how international law filters down and is understood by individual members of the public and why that is relevant for thinking about compliance and enforcement.” To undertake his research, Professor Wallace has collected various data sets. For his first book, for example, he created a data set capturing the conduct of actors during conflict. Wallace compiled reports from human rights organizations, the Red Cross, and neutral powers and other sources to construct the first large N-dataset of its type.

Finally, our third new faculty member is Sophia Jordán Wallace, who joins the department as Associate Professor. Wallace received her Ph.D. in Government from Cornell University in 2010, and spent the last year as a Ford Foundation Fellow at the University of Pennsylvania. Before joining the UW faculty, she taught at Rutgers University-New Brunswick from 2012 to 2016 and at the University of Kentucky from 2009 to 2012. Professor Wallace’s research and teaching focuses on Latino politics and representation, social movements, and immigration policy.

Since both of her parents are immigrants, she has a natural interest in immigration and immigration policy. In fact, she says that had she not gone into academia, she would have pursued a career as an immigration lawyer. The issue of immigration impacted her as a child, as she notes “I was always acutely aware of what it meant to be a child of immigrants in an area in which my parents were struggling to figure out this country,” thus “questions of immigration are central to who I am.”

Professor Wallace is currently working on her first book entitled United We Stand: Latino Representation in Congress, in which she assesses what Latino interests are and how they are being represented by Latino and non-Latino legislators. She bases her definition of what constitutes Latino interests not just on public opinion polling but also on histories of activism, which “we should take […] as a very strong signal of the relative importance of those issues for that community.” Her assessment of legislative activity is expansive as well as it goes well beyond voting to include “bill introduction, co-sponsorship, what [legislators] say on the floor, what they do in committees, how they spend their time, [and] what kind of resources they devote in their offices to Latino outreach.” Based on her analysis of this extensive data, she concludes that “there is a lot of evidence that Latino representatives do represent Latinos in ways that are distinct from other non-Latino representatives.”

Along with a colleague, Wallace also created the Immigrant Rights Protest Data Set capturing 357 protests that occurred between February 14 and May 1st, 2006. The data points initially came from email accounts and where then confirmed by newspaper reports and by calling police stations. They used that data in conjunction with public opinion data that was gathered before, during and after the protest to assess the effect of the protests on attitudes. Furthermore, they relied upon census data to map the protests onto congressional districts, which then built the foundation for an analysis of how these protests influenced congressional activities.

Professor Wallace is excited to join the department since it “has long had a strong group of people working on race and politics,” an area that she notes very few departments in the country have developed strength. During the Autumn quarter, Wallace is teaching the undergraduate course “U.S. Latino Politics” as well as an advanced seminar in American politics on “Immigration Politics and Policy.” In Winter, she will be teaching the undergraduate course “U.S. Race and Ethnicity Politics.”