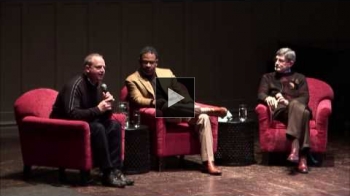 UW Political Science Professor Christopher S. Parker moderated the Town Hall Seattle on “Gaslighting in American politics: The line between disagreement and lies” on February 27, 2017. As the event description notes:

“The term "gaslighting" comes from the 1944 film "Gaslight," about an abusive husband who secretly manipulates the lighting in his house in order to drive his wife mad. It has been used more recently to refer to a political phenomenon involving the dissemination of untruths to an extent that causes the public to doubt truth from falsehood.”

Professor Parker was joined by UW Communication Professor David Domke and Wellspring Family Services vice president R. Keith Myers. One of the central questions they discussed is whether President Trump is gaslighting us. In his introduction, Parker shared several video clips highlighting examples of gaslighting with the audience. Professor Domke shared his thoughts on gaslighting from a communications perspective and drew a distinction between “outright falsehoods” and “ideologically inclined worldview claims.” Myers addressed the issue from a clinical perspective noting that “we have basically been designed by evolution to accept alternative facts,” and as a consequence, we are all vulnerable to it.

Furthermore, the panel addressed the role of racism, sexism, class and power, as well as answered the question whether there are certain people who are more predisposed to gaslighting on both the receiving end and the distributing end. At the end of the discussion, the panel responded to the question whether gaslighting poses a threat to democracy.

You can watch the whole 70-minute discussion on the Town Hall Seattle website. Town Hall Seattle is meant to “foster an engaged community through civic, arts, and educational programs that reflect—and inspire—our region’s best impulses: creativity, empathy, and the belief that we all deserve a voice.”