The Flaws of “A Better Deal”: Professor Parker discusses Democratic platform on Slate 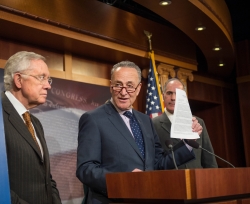 In the article, Professor Parker examines the new platform of the Democratic Party and discusses its likelihood of leading to electoral success. He notes that “this new progressive strategy is essentially a paean to working-class politics, specifically the white working class, to the exclusion of everything else — especially issues of race.” Ultimately, he argues that there are at least two reasons why it is a flawed strategy and that “surely Democrats can come up with a better deal.”

The article titled “Democrats’ “Better Deal” is a bum for progressives – and won’t win elections” appeared on August 12, 2017 on Slate.com. Slate is an online daily news magazine which “combines humor and insight in thoughtful analyses of current events and political news.”