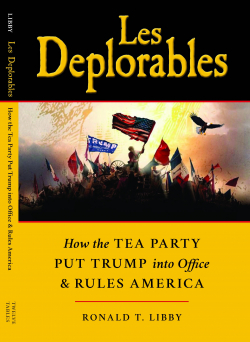 University of Washington Political Science alumnus, Professor Ronald T. Libby, published a book entitled "Les Deplorables: How the Tea Party Put Trump into Office and Rules America" in June 2017. Professor Libby received his MA and PhD from the Department of Political Science. He is currently a professor of political science and public administration at University of North Florida. Les Deplorables is the first book published by a new press founded by Professor Libby and his colleague called Twelve Tables Publishers.

About Les Deplorables:
Les Deplorables focuses upon Donald Trump's third revolutionary effort to dismantle Franklin Roosevelt's "new deal" programs of big government that has dominated America since the depression of the 1930s. The first effort was Ronald Reagan's "Moral Majority" counterrevolution from 1980-89. The second attempt was led by Newt Gingrich's 1994 "contract with America" and Republican control of Congress in the 1990s. While the first two revolutions made inroads dismantling the federal bureaucracy from the top down, they ultimately failed because they did not have the sustained power necessary to transform government and society. Trump's effort is deeper and more powerful than the first two revolutions. This book is explains the third American revolution in the aftermath of the Tea Party's victory in the 2016 election. The leader of the revolution, Donald J. Trump, can aptly be described as the Tea Party President of the United States. Despite winning the presidency, however, the Tea Party is engaged in a battle with establishment Republicans (RINOs) for control of Congress and the media. The outcome of this contest will determine the success of the Trump revolution. If Trump's presidency is successful in carrying out his Tea Party agenda, Franklin Roosevelt's big government regime will end. Accompanying this revolutionary change will be a realignment of the party system that will likely overthrow the Democrats and make the Republicans the dominant political party under Tea Party leadership. Trump's Tea Party coalition, therefore, threatens the political establishment of both major parties, the federal bureaucracy, Wall Street, social elites, and the federal bureaucracy. This fits the classic definition of a revolution in which citizens overthrow the ruling elite. It is comparable to the American Revolutionary War of the 18th Century in which the founders of the new American Republic defeated the most powerful ruling elite in the world--the British Empire.

To purchase the book visit Amazon.