2017 Fall Faculty Panel - The Politics of Terror and Terrorism 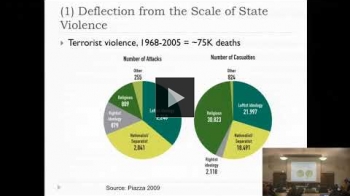 On November 15th, political science professors Geoffrey Wallace, Megan Francis, and Ellis Goldberg participated in an engaging conversation in a panel organized by the Department of Political Science. The topic was on the politics of terror and terrorism. The room was full with an audience of mostly students, as well as faculty, university staff, and alumni.

Each presenter offered a different view of terrorism based off their areas of expertise. Professor Wallace began the discussion by examining terrorism from an international perspective. Next, Professor Francis discussed terrorism in the context of the United States, specifically racial violence. Professor Goldberg concluded the conversation by looking at terror more broadly. He compared two examples of terror from different parts of the world and time periods. Professor Rachel Cichowski served as moderator.

Wallace’s talk centered on state violence and its relationship to terrorism. He claimed that although states can engage in violence (and do), their violence is often not technically considered terrorism in much of the popular discourse. International relations scholars traditionally define terrorism as violence predominantly employed by non-state actors. He described four ways in which states use the fear around terrorism to perpetrate its position.

Wallace argued that states themselves are the biggest perpetrators of violence. However, by turning the debate to new forms of terrorism committed by non-state actors, they are able to deflect from their own violence. Wallace explained that the label of “terrorist” and “terrorism” carries such emotional baggage it can be used by states to justify further state violence and control. One way to maintain their control is with the dehumanization of the “others,” allowing the state to remove rights and protections from the people. All three of these points tie together to help reassert state authority. He ended his talk by saying, “Terrorism certainly represents a threat, but has also represented an opportunity for states to maintain their society of sovereigns.”

Francis’s lecture focused on racial violence in the United States. Using the rally at Charlottesville as an example, she explained to the audience that these moments of racial violence do not just suddenly happen out of nowhere they are a constant. “Where we are now is not anything new, it’s an amplification of what was. It’s an amplification of our inability to appropriately come to grips with our political history.”

People often think of terrorism as something that happens far away. An attack from outside on our values. Francis emphasized in her talk that this just isn’t so. Our long history of racial violence against African Americans is terrorism. “African Americans in this country constantly feel like their bodies and lives are under assault.” She concluded by asking the audience to reflect on how their values might allow them to commit terrorist acts against others in their community.

Unlike Wallace, Goldberg argued that terror is a political threat when it is deployed by the state or powerful social actors trying to re-capture power. Goldberg compared the Reconstruction period in the South with current issues in the Middle East as an example of this.

Goldberg explained that the emergence of terror comes when the state institution shatters and the victor has limited goals. After the South broke, for example, the Ku Klux Klan formed in order to maintain white supremacy and destroy the foundation of the new state in formation. White supremacists used terror methods such as lynching as a symbolic act to make it clear who was in charge. Similar events occurred in the Middle East during the formation of the Islamic State. Public executions and bombing of political sites are used to show inhabitants of the state who is in charge.

There was a lively question and answer session following the panel discussion. The audience asked important and difficult questions. The faculty panel is a quarterly discussion with faculty members within our department on different political issues we are facing today. If you are interested in receiving invitations please sign up at:  https://www.polisci.washington.edu/stay-connected