Prof. Christopher Parker at Town Hall Seattle with Arlie Russell Hochschild on her book, "Strangers in Their Own Land" 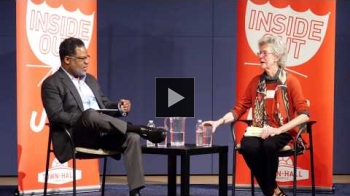 Arlie Russell Hochschild with Christopher Sebastian Parker: Strangers in Their Own Land

Prof. Christopher Parker on February 12th, 2018 hosted a Town Hall Seattle event with UC Berkeley Sociologist Arlie Russell Hochschild discussing her book “Strangers in Their Own Land” and why many white voters went for Trump.

The conversation started with the purpose of Hochschild writing the book, stating she wanted to find the reasons for the growth of movements like the Tea Party. Hochschild acknowledged that she had to come out of the bubble in which she lived and go elsewhere in the country to try to understand other points of view. She attempted to get the “deep story” from people to gain insight to their lives and their political choices.

Hochschild found that people who favored the Tea Party were concerned about the “line-cutters”, those who seemingly got help from something like Affirmative Action and got ahead in the line while the line hasn’t advanced much for the average American in recent decades. This line-cutting also breeds a distrust of the government because the line-cutters are being helped with tax money.

Hochschild lists four pillars of activism to reignite progressivism – importance of democracy, reformulate democratic platforms to be party of the working people and patriotic, get the vote out, reach out to subgroups (who voted for Obama but recently voted for Trump) that could be convinced to vote again for the Democrats.

Prof. Parker stated his research has shown that only a small percentage of getting more voters out can take back states like Michigan in a general election. Scaring the base to vote is what is needed.