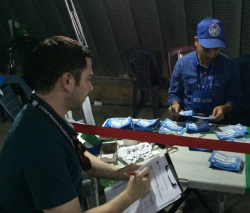 In 2010, James Long and his colleagues created a simple yet effective anti-corruption tool to fight election fraud in many elections. Around the world, a common approach to promoting fair elections is to deploy international observers to monitor local polling stations. This approach is expensive (it can cost thousands of dollars per observer) and there is limited evidence of its benefits.  While serving as one of these observers in Afghanistan in 2009, James happened to take a photo of the final vote tally posted at a polling location he visited in Kabul. He later compared the results to the official results reported by the government. They were different.

James had discovered corruption and rigging that was occurring at a higher level than individual polling stations. This insight led his team to develop “photo quick-count,” a phone app where anyone can audit the results of a polling station by uploading a photo of the local vote count. In the next Afghan election, they notified a randomly selected group of polling officials in some of the precincts that they were photographing vote tallies. This experimental design demonstrated that a simple, low cost, intervention could reduce different forms of election fraud by between 25 and 60 percent.

Electoral corruption occurs around the world and it can take many forms, from voter intimidation to ballot stuffing and the manipulation of final tallies. However, recent elections are highlighting a new concern – the vulnerability of electronic voting systems. In the U.S., investigators have discovered that prior to the 2016 elections, Russia succeeded at or attempted to hack into the voting systems of at least 21 U.S. states. In addition to demonstrating the potential for voting fraud (so far, there is no evidence that votes were altered but there has also been little investigation), the hackers gained access to personal information (such as Social Security numbers) of millions of Americans. So concerning were these actions that President Obama used the ‘red phone’ to let the Russian government know that the U.S. had discovered the breach.

The possibility of electronic voting manipulation became a reality for Kenyans in 2017. The country’s Supreme Court nullified the presidential election based in part on an audit of tally forms that revealed numerous differences between polling station and certified results sent over their results transmission system. Moreover, thousands of Kenyans had used photo quick-count during the election to post photos of tallies to social media in an effort to provide a check on the process.  The willingness of judges (and subsequent agreement by the leading candidates to abide by the court’s decision) to nullify an election based on forensic evidence of manipulation was unprecedented. However, Kenya’s situation is hardly unique. James and his colleagues have also deployed photo quick-count in Uganda and South Africa. Many other developing countries’ elections systems have the potential to be improved by forms of this monitoring system.

As of now, James does not include the U.S. on this list. Five states (Louisiana, Georgia, South Carolina, New Jersey, Delaware) and many counties in nine other states use electronic voting systems that do not produce a paper record. These voting systems are arguably less secure than Afghanistan’s. Recent reports raise concerns about the “significant vulnerabilities” of voting systems in many other states as well ahead of the 2018 elections. Importantly, hackers do not have to change election results to cause great damage to our democratic process; they just need to raise doubts about the legitimacy of those elections by hacking into voting infrastructure in the first place. As things currently stand in states and counties that lack voting verification infrastructure, there is little to prevent this from happening.

Further, as the Florida recount in 2000 demonstrated, unlike Kenya, the U.S. also lacks transparent procedures and laws for adjudicating potential electoral disputes or addressing concerns about the fairness of the count. When a disputed result between contestants in Afghanistan’s 2014 presidential election produced a political stalemate, the country (with U.S. and international community support) conducted a full audit of all original ballot papers and vote tallies. This audit (which James observed) documented roughly one million ballot discrepancies. Both sides accepted the audit result, and the impasse was resolved when the winning candidate agreed to include the losing candidate in his cabinet.

Ensuring fair elections in the U.S. is not especially difficult from a technological perspective, as James’s work with photo quick-count demonstrates. What is needed is political will at the local level to provide citizens with voting and count technology that is on par with the standards of Afghanistan and Kenya – in particular, verifiable paper records and sound auditing procedures of vote totals.