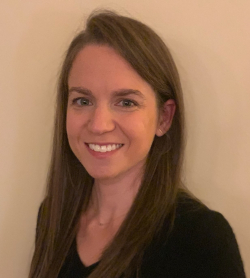 Assistant Professor Caitlin Ainsley recently joined our department after receiving her Ph.D (and M.A. and B.A.) from Emory University. She grew up in Santa Barbara, California, spending much of her time surfing and playing volleyball before moving to Atlanta, Georgia, for college and graduate school.  Forced to find new hobbies with the closest beach now hundreds of miles away, she developed a fascination with states’ management of currency and after a one-year stint at the London School of Economics, returned to Emory for graduate school.

Caitlin is a Comparative Political Economy scholar trained in mathematical modeling and statistics.  At the undergraduate level, she teaches an applied and very popular game theory course, Strategy in Politics, and an upper division course, Government and the Economy.  At the graduate level, Caitlin teaches our introductory research design course for incoming graduate students, as well as courses on formal modeling and game theory.

As a political economist, Caitlin’s primary research examines the politics of monetary policymaking and the relationship between central banks and executive branches of governments. Around the world it is common for elected officials to delegate decisions about monetary policy to independent central banks. The assumption is that politicians who care about votes will be tempted to support monetary policies that overstimulate the economy, leading to hyper-inflation. Independent central banks staffed with knowledgeable non-partisan economists who cannot easily be fired, it is assumed, will resist this temptation. They will do a better job of promoting stable job growth and keeping inflation in check. President Trump’s recent criticism of the current chairman of the Federal Reserve (for slowing growth by raising interest rates) was a nice illustration of this dynamic.

Caitlin’s research examines how monetary policy and currency regulation, often thought of as technical and apolitical policy domains, are intrinsically political endeavors we cannot disassociate from political incentives and institutions.  Central bank decisions are not independent of politics and we should not assume they reflect economic consensus.  In a recent article based on her dissertation, Caitlin argues that the long terms of appointment that have come to define independent central banks can undermine the inflation-fighting potential of monetary delegation.  Facing economic uncertainty, politicians may be more inclined to nominate inflation-tolerant central bankers, locking in a growth-minded strategy that outlives the economic environment for which it was optimal.  In other work, Caitlin considers the consequences of mobile money and digital currency regulation (e.g. Bitcoin), highlighting the distributive consequences of such policies and the political interests motivating their adoption and implementation, or lack thereof.

Additional information about Caitlin’s diverse teaching and research interests can be found here.