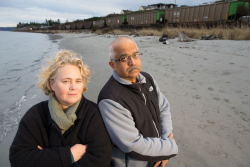 Aseem Pakash and Nives Dolšak have been in the news lately – a lot. Aseem is a Professor of Political Science and the founding director of the Center for Environmental Politics. Nives Dolšak is Professor and Associate Director of the School of Marine and Environmental Affairs at the UW. Since 2016, they have become increasingly prominent national voices on environmental issues. They have written scores of articles for prominent and influential blogs such as the Huffington Post, Forbes.com, Slate, the Hill and the Washington Post’s Monkey Cage. They can be seen on many local television stations and heard on many radio outlets.

Public scholarship of this kind is rare in academia, although it is becoming more common. The fact that the collaborators in this case are married is even more unusual. We recently had an opportunity to ask Nives and Aseem about how they got started and why public scholarship is so important to them.

First of all, how did you meet?

Aseem. I’m from India and Nives is from Slovenia. We met at Indiana University, Bloomington where we were graduate students in the same interdisciplinary Ph.D. program and had the same PhD dissertation chairs. We were actually married on campus with our dissertation chair Professor Elinor Ostrom (who shared the Nobel Prize in Economics Oliver Williamson in 2009) and her spouse Vincent (also a Professor at Indiana) serving as witnesses.

When did you start collaborating?

Nives: We didn’t start collaborating professionally until 2016. Prior to that we had our own individual research interests. Once we both became Full Professors we had the opportunity to reevaluate and try new things.

Aseem: The other thing that mattered was the election of Donald Trump.  The quality of policy discourse has been deteriorating over the years. Before he even took office, scholars and activists were concerned about  rollback in environmental policy. We felt that it was imperative that scholars play a more visible role in promoting public discourse around climate change.

How do you collaborate?

Aseem. It has kind of snowballed. As a family, we have always discussed policy issues – while cooking dinner, driving etc (see this article that talks about this). At some point we just decided to write something together and the ideas developed in one blog article that led to more ideas, and so on. More recently, our public scholarship collaborations have inspired us to co-author peer reviewed articles for scholarly journals.

What are the challenges of being a two academic household?

Nives. The only unique challenge we can think of is that having a child in school has meant that we are not usually able to attend the same conferences.

What kind of responses have you had to your public scholarship? Are they always positive?

Aseem. Our goals are to promote conversations and ultimately change behavior. We have been pleasantly surprised by the response. Some of our blog posts have been viewed more than 200,000 times. Equally important, they seem to be having an impact in terms of starting conversations.

Nives. For example, after we published The Climate Change Hypocrisy of Jet Setting Academics in the Huffington Post, scholars from around the world have contacted us about establishing a network with the mission of encouraging academics to reduce their carbon footprints. More recently, the Western Political Science Association deserves credit for encouraging academics travelling to their annual conference to purchase carbon offsets (i.e., pay a small fee to fund a carbon sequestering activity such as tree planting). We have written to several other major academic bodies as well and we are hopeful that they will also  soon jump on the carbon offset bandwagon (as a starter).

Aseem. The other impact that has surprised us is among fellow academics. Academics usually share their work through books and articles published in peer review journals. We are finding that many academics appreciate blog posts as a low cost way to stay up to date on the research activities of their colleagues.

Are the responses always positive? Definitely not! We get a lot of email from climate change deniers. We also hear from people who think we are being too critical of environmental organizations. What’s important for us is that we are reaching people who would not normally be exposed to academic perspectives.  And that is a good thing.