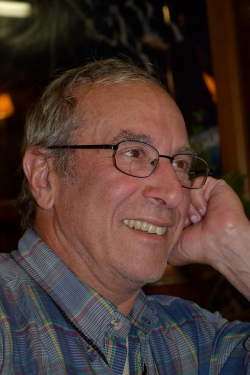 It is with great sadness that we inform you that Professor Emeritus Ellis Goldberg passed away on September 21, 2019.

Ellis was a scholar of comparative politics and Middle East politics in the Department of Political Science and past Director of the Middle East Center in the Jackson School of International Studies. He received his BA from Harvard University and his Ph.D. from the University of California, Berkeley, before joining the University of Washington in 1985. He published four books, including Tinker, Tailor and Textile Worker: Class and Politics in Egypt, 1930–1952 (University of California Press, 1986) and Trade, Reputation and Child Labor in 20th Century Egypt (Palgrave/MacMillan, 2004), and was the author of numerous articles and reviews.  He received a Guggenheim Fellowship and was named a Carnegie Scholar.

Over the years, he held visiting appointments at Princeton, Harvard, and the American University in Cairo.  Ellis witnessed the Arab Spring protests leading to the resignation of Egyptian President Hosni Mubarak, and recorded his reflections in the acclaimed blog “Nisralnasr: Occasional Thoughts on Middle Eastern and US politics.”  He was at work on a book on the 2011 Egyptian revolution when he died. Ellis’s colleagues and students remember him as an immensely learned and brilliantly original scholar and a shining example of intellectual and moral integrity. He was an inspiring teacher of undergraduates and generous mentor of graduate students, whom he helped launch on successful academic careers.  He is survived by his partner Tamara Pinkas and his children Shaul Gever, Sofia Benson-Goldberg, and Abraham Goldberg.  We will miss him.