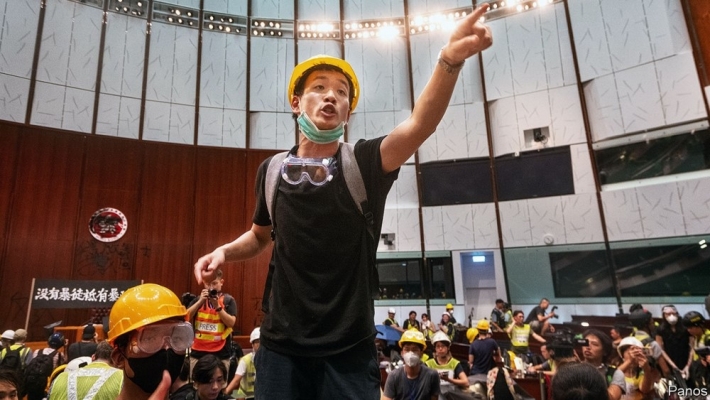 Kai Ping (Brian) Leung is a Ph.D. student in our department who specializes in Comparative Politics. After classes ended last summer, he returned to Hong Kong and participated in public protests over a proposed law allowing extraditions to mainland China. He received international media coverage for removing his mask and reading a statement on behalf of the protestors during the occupation of the chambers of the Legislative Council.

We recently had an opportunity to sit down with Brian to learn more about Hong Kong’s political history, the pro-democracy movement, and the future of Hong Kong.

Hong Kong was part of China before British colonization in 1842. In 1997, the British transferred Hong Kong to China.  A patriotic interpretation of this handover would be a return to the motherland. But many Hong Kong people, who were excluded from the negotiation process that decided the city’s future,  view the handover in less positive terms - as a transfer of sovereignty over their home from the British to the Chinese.  Hong Kong has a strong sense of local identity, especially among young people, who are frustrated with the lack of democratization and empowered by a rich history of social activism.

What should people know about the political history of Hong Kong as it relates to the pro-democracy movement?

Hong Kong has never really been a democracy. Under the British, the Governor of Hong Kong was appointed by the British government. However, as the transfer to China became imminent, the British became more interested in securing Hong Kong’s autonomy. The transfer of control created a window of opportunity for democracy for the first time in Hong Kong. The Sino-British Joint Declaration that led to the handover provides for a Chief Executive appointed “on the basis of the results of elections or consultations to be held locally.” The Declaration further states that “Rights and freedoms, including those of the person, of speech, of the press, of assembly, of association, of travel, of movement, of correspondence, of strike, of choice of occupation, of academic research and of religious belief will be ensured by law.” The Basic Law - the domestic legislation based on this international treaty that is viewed as the mini-constitution of Hong Kong - further stipulates that the “ultimate aim” is “universal suffrage” in choosing both the Chief Executive and legislature.

What are the protests about?

The people of Hong Kong take the rights articulated in the Basic Law very seriously. At the same time, China has an authoritarian government and a history of suppressing popular reform movements, sometimes violently. In Hong Kong itself, the Chinese government has managed to organize the Chief Executive appointment process in a way that has limited popular input, despite the language of the Joint Declaration (and just as the British did in their time).

The most recent protests were triggered by a proposed law providing for the extradition of accused criminals from Hong Kong to China. The proposed law did not specifically target political activists, but many were concerned that it could be used to that effect. Equally important, it was a reminder of Hong Kong’s eroding autonomy – another step along a slippery slope.

Hundreds of thousands of citizens eventually took to the streets. Did the recent protests have any effect?

Yes, they did. In November, pro-democracy candidates won an unprecedented 388 out of 452 seats in district council elections – a staggering 263 additional seats compared to the previous election. Although these positions have limited substantive power (they are mostly consultative), the results clearly challenged the government's narrative that most Hong Kong residents opposed the protests.

But it is also important to recognize that these relatively modest advances came at great personal cost. Over 6,000 have been arrested, with many facing long jail sentences. Nearly a dozen people took their lives in protest, two people were killed and rumors suggest that many more may have died. Moreover, waves of large-scale, often indiscriminate and arbitrary arrests have become a new strategy of the regime, and protestors face much more severe penalties if they are arrested for a second time.

What are the aspirations of the movement?

Our modest hope is that that the people of Hong Kong will be able to play a more pro-active role in the selection of their leaders. Past protests, such as the Umbrella Movement in 2014 have been successful in a negative sense – they prompted officials to resign under pressure from the Chinese government. The recent district elections raise the remote yet tantalizing possibility that ordinary citizens may eventually have some influence over who replaces them.

Read Brian’s article in The Economist.  He will be part of a Hong Kong panel discussion on January 18th in Kane Hall.