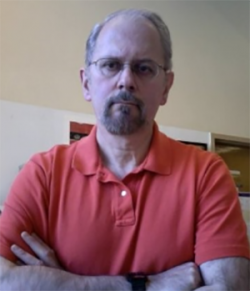 Dr. Jerome (Jerry) Kohl, our Administrative Assistant, passed unexpectedly this summer. Jerry was a thoughtful, kind and witty individual, an excellent editor and a cat lover. But few of us appreciated that the person collecting the mail every morning was, among other things, the world’s foremost expert on German composer Karlheinz Stockhausen.

Jerry grew up in Lincoln, Nebraska as one of 4 children of a military family. He played clarinet in the Lincoln’s Symphony Orchestra during high school and college where he earned undergraduate and master’s degrees in music. During the Vietnam war, Jerry served in the Army band.

After completing military service, Jerry enrolled at the University of Washington, where he earned a Ph.D. in music theory in 1981 (Serial and Non-Serial Techniques in the Music of Karlheinz Stockhausen from 1962–1968).  Jerry also helped create and was the founding board President of the Early Music Guild (now Early Music Seattle).  He also served as the managing editor of Perspectives of New Music for many years. A need for health insurance then led him to the Classics department at the University of Washington where he worked for 13 years before transitioning to our Political Science department.

German avant-garde composer Karlheinz Stockhausen aspired to (in Jerry’s words) “construct music entirely unencumbered by formerly ‘known’ stylistic elements.”  If you are unfamiliar with Stockhausen, many recordings of compositions can be found on YouTube. Jerry’s wife, Ann, reports that he was deeply moved (sometimes to the point of tears) by Stockhausen’s works.

Jerry continued to write and give lectures around the world while he was answering phones and sorting mail in our office. His scholarly accomplishments include a recently published book about one masterpiece (Karlheinz Stockhausen Zeitmasse, 2017), twelve translations of books written by Stockhausen, and a score of academic articles. He also remained connected to his own musical roots - teaching recorder for decades as a longstanding member of the Seattle Recorder Society.

Jerry clearly made his mark while treating everyone he met with respect, kindness and humor. We will miss him.