Excerpt from "A subject to love, a determination to speak her truth" 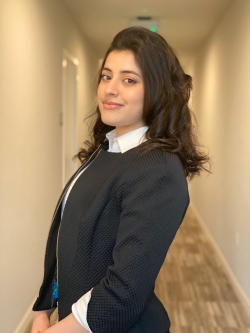 This is an excerpt of "A subject to love, a determination to speak her truth" by Jenelle Birnbaum published June 11, 2021.Read the full article at https://www.washington.edu/uaa/2021/06/11/a-subject-to-love-a-determination-to-speak-her-truth/

The diagnosis came on her first day of fall quarter. Cancer. Maha Alhomoud, newly arrived from Saudi Arabia had two options: Return home for treatment or stay in Seattle, attend the University of Washington and receive cancer treatment in the states.

Alhomoud’s goal of attending university abroad began when she was 12 years old. She bolstered her admissions chances through summer programs, robotics competitions, independent study programs such as the Saudi Research Science Institute (SRSI) at King Abdullah University for Science and Technology (KAUST), and had a strong educational foundation in STEM, thanks largely to the King Abdulaziz and his Companions Foundation for Giftedness and Creativity, known informally as Mawhiba. She studied English in school from a young age and prepared for a career in STEM, most likely mechanical engineering. Yet participating in Model United Nations piqued her interest in international relations. Throughout these Model UN conferences, she represented Iran, France, South Korea and Bahrain and valued the broad perspective this gave her. She got her first taste of using her voice to drive change through participating in Toastmasters.

This strong foundation in math, science and international relations had Alhomoud considering a double major in engineering and political science when she first came to the UW. But the diagnosis meant she’d be splitting her time between the hospital and class, making it difficult to take any lab classes. Even so, she continued preparing for a possible career in both fields, taking math and political science courses.

She received treatment in Seattle throughout her freshman year. Her dad, who initially came just to help her move, stayed for the next 12 months to care for her. That year consisted of eight months of an intensive chemotherapy regimen, additional medications, hair loss, chronic pain and weakness, plus additional conditions — all while going through her first year of college.

“I was constantly studying at the hospital listening to my lectures that were recorded specially for me, and immersed in my studies,” recalls Alhomoud. “In a way, it was a distraction from my illness and in studying political science, I had found subjects that I truly loved and enjoyed studying, even throughout the most traumatic experience of my life.”

Finally, good news: The cancer went into remission and the treatments were complete.

Throughout her sophomore year, Alhomoud debated majoring in engineering — the more straightforward career path — or political science. “I’ve had people tell me that there wouldn’t be many opportunities for women in political science in Saudi Arabia,” explains Alhomoud. “But, through my diagnosis and my own experiences, I realized that for me, the most important thing was to speak my truth and pursue my passions. Going from there, I decided that regardless of the obstacles that I would face as a woman, I would still pursue political science. And, today in Saudi Arabia, there are continuously new and exciting opportunities for Saudi women to participate in policymaking and politics.”

Read the full article at https://www.washington.edu/uaa/2021/06/11/a-subject-to-love-a-determination-to-speak-her-truth/