Approaches to Religious Violence, Radicalism, and Deradicalization: Perspectives from the US and Indonesia 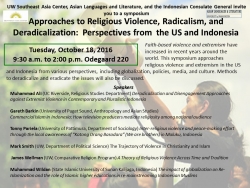 UW Southeast Asia Center, Asian Languages and Literature, and the Indonesian Consulate General invite you to a symposium:

Approaches to Religious Violence, Radicalism, and Deradicalization: Perspectives from the US and Indonesia

Faith-based violence and extremism have increased in recent years around the world. This symposium approaches religious violence and extremism in the US and Indonesia from various perspectives, including globalization, policies, media, and culture. Methods to deradicalize and eradicate the issues will also be discussed.

Tonny Pariela (University of Pattimura, Department of Sociology)
Inter-religious violence and pea! ce-making effort through the local awareness of “Katong Oran! g Basodara” (We are brothers) in Maluku, Indonesia

Mark Smith (UW, Department of Political Science)
The Trajectory of Violence in Christianity and Islam

Muhammad Wildan (State Islamic University of Sunan Kalijaga, Indonesia)
The impact of globalization on Re-Islamization and the role of Islamic higher educations in re-mainstreaming Indonesian Muslims