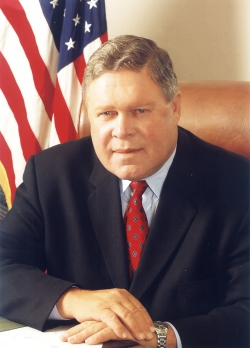 On June 13th some 1,200 students, guests, faculty, and staff attended the 2013 Departmental Convocation that recognized those with new BA, Masters, and PhD degrees and bestowed a number of awards for academic accomplishments.  A highlight of the ceremony was the granting of the department's distinguished alumnus award to Honorable Norm Dicks.  He joins a dozen distinguished alumni who had been recognized in previous years for their career accomplishments.  Congressman Dicks provided an inspirational speech with which he reminisced about his undergraduate days and recounted his journey from congressional aide to becoming a member of Congress.  He related how he was able to achieve many accomplishments in working with others, the importance of good staff, and his appreciation of what he learned about governing from Professor Hugh Bone—a beloved faculty member and department chair at the time that Dicks was an undergraduate.

Congressman Dicks's selection recognizes his extraordinary career in public service and the 36 years he served representing Washington State's 6th Congressional District.  His remarkable accomplishments include creation of a vast array of environmental, defense, and economic-development projects in the state, long-standing advocacy for protecting the environment, and unwavering commitment to national security.  After graduating from West Bremerton High School, he enrolled at the UW where he completed his political science BA degree in 1963 and his JD degree in 1968.  He then served on the staff of Senator Warren Magnuson until his run for Congress in 1976.  He won re-election 17 more times before retiring in 2013.