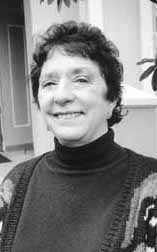 Professor Emerita Nancy C.M. Hartsock passed away on March 19, in Seattle, WA.  Nancy joined the departments of Political Science and Women Studies (now Gender, Women, and Sexuality Studies) at the University of Washington in 1984.  Before then, she held appointments at the University of Michigan, Johns Hopkins, Stanford, and Oberlin.  She received her Ph.D. in Political Science from the University of Chicago in 1972, with a dissertation on “Philosophy, Ideology, and Ordinary Language:  The Political Thought of Black Community Leaders.”  Two years later, in 1974, her pioneering work in feminist theory began to appear in Quest: A Feminist Quarterly.  Nancy had found her calling in political theory.

Her magnum opus, Money, Sex, and Power: Toward a Feminist Historical Materialism (1983), offered a substantive contribution to the theorization of the sexual division of labor, and women’s labor more specifically, as a resource for the development of a “feminist standpoint.”  “The Feminist Standpoint:  Developing the Ground for a Specifically Feminist Historical Materialism” (1983) was widely reprinted in edited anthologies of feminist theory.  These two works are among the most influential and widely-cited pieces of scholarship in feminist and political theory.  Nancy’s elaboration of the feminist standpoint was subsequently presented in The Feminist Standpoint Revisited and Other Essays (1998).  Her work was adopted, extended and revised, as well as criticized, by feminist scholars, and continues to be a vital touchstone for feminist inquiry.  In her later work, Nancy focused her attention on the political economic dynamics of globalization and their impacts on women’s labor and life-chances.

Nancy served in a variety of leadership and service roles in the profession, including President of the Western Political Science Association (1994-95) and service on a variety of editorial boards.  She was also a co-founder of the Center for Women & Democracy in Seattle, WA and served as its Founding Director (1999-2000).  In 1993, she was honored with a Mentor of Distinction Award from the American Political Science Association Women’s Caucus.

Nancy left us all-too-soon, although she defied the medical statistical odds by 30 years when she was diagnosed with late-stage breast cancer in 1985.  As we mourn Nancy, let’s also celebrate her significant achievements, contributions, and resilience.  In addition to her passionate pursuit of feminist theory and social justice, Nancy was an accomplished equestrian and musician.  Not content merely to play the harpsichord, she proceeded to build one soon after completing her dissertation.  Nancy lavished loving attention on many fortunate cats, including Stokely, Annie, Chan, and Emma.  She was also a shameless foodie.  Her passion for travel was reflected in the art that adorned her home.

On the occasion of her retirement in 2009, Nancy’s commitments to graduate teaching were reflected in the decision to create a graduate student paper prize in her name at the University of Washington, “The Nancy C.M. Hartsock Prize for Best Graduate Paper in Feminist Theory.”  This fund is administered by the College of Arts & Sciences.  Graduate students from all departments and schools in the college are eligible to apply for this annual prize.  If you would like to contribute to this fund, please make your check out to “UW Foundation,” with a memo line indicating “Hartsock Prize Fund.”  Donations may be mailed to:  Christine Di Stefano, Department of Political Science, Box 353530, University of Washington, Seattle, WA 98195-3530.

May Nancy “rest in power.”*

* Thanks to Heather Pool, a former student of Nancy’s and now Assistant Professor at Denison University, for this felicitous phrase, which Heather used in her testimonial to Nancy on Facebook.