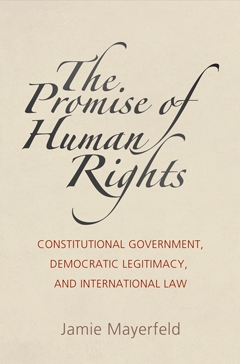 International human rights law is often criticized as an infringement of constitutional democracy. In The Promise of Human Rights, Jamie Mayerfeld argues to the contrary that international human rights law provides a necessary extension of checks and balances and therefore completes the domestic constitutional order. In today's world, constitutional democracy is best understood as a cooperative project enlisting both domestic and international guardians to strengthen the protection of human rights. Reasons to support this view may be found in the political philosophy of James Madison, the principal architect of the U.S. Constitution.

Jamie Mayerfeld is Professor of Political Science at the University of Washington.