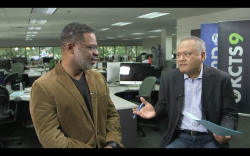 Just days before the first presidential debate of this general election season, UW Political Science Professor Christopher S. Parker was interviewed by Enrique Cerna of KCTS 9. The two discussed Trump’s primary win and his chances for winning the presidency as well as previewed the first presidential debate. Professor Parker noted that there are three words that can explain Trump’s success: “Scared white people.” While acknowledging that this is an oversimplified version of the argument he is making in his research, Parker points out that “one cannot overestimate fear” and that there is a part of the electorate that is scared of our first black president even though he governs as a centrist. Trump “is playing on these fears and it is getting him some place,” Parker said. But can he win the general election? Parker believes that he has a chance and here is why:

A lot of Democrats—or at least enough of them—really don’t like Hillary Clinton. But beyond that they don’t think Trump is competent and he is going to win. So in other words, ‘how can she blow it to this guy?’ And so not only do they not want to vote for Hillary, they don’t think he’s going to beat her so what do they do?  They sit out.

Furthermore, Cerna asked Professor Parker to elaborate on why he thinks Trump’s success can be viewed as “a teachable moment” referring to an argument he made in an interview with KUOW earlier this year and what we should expect from the first presidential debate.

A brief summary of the interview including a link to the full interview was posted on the day of the first presidential debate, September 26, 2016, on Crosscut.com. Crosscut is the Pacific Northwest’s reader-supported, independent, non-profit electronic journal that strives to provide its readers with facts and analysis to enable them to intelligently participate in civic discourse.

On a final note, Professor Parker is heading up the KCTS9/Crosscut/Washington election poll, which will be released on October 10th and then again right before the election.