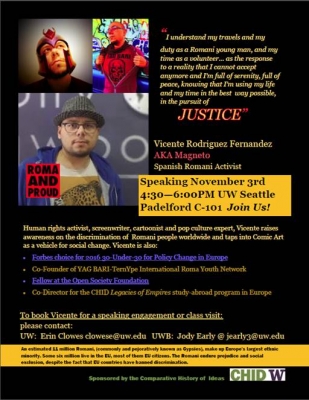 “I understand my travels and my duty as a Romani young man, and my time as a volunteer... as the response to a reality that I cannot accept anymore and I’m full of serenity, full of peace, knowing that I’m using my life and my time in the best way possible, in the pursuit of Justice.”

Human rights activist, screenwriter, cartoonist and pop culture expert, Vicente raises awareness on the discrimination of Romani people worldwide and taps into Comic Art as a vehicle for social change. Vicente is also:

An estimated 11 million Romani, (commonly and pejoratively known as Gypsies), make up Europe's largest ethnic minority. Some six million live in the EU, most of them EU citizens. The Romani endure prejudice and social exclusion, despite the fact that EU countries have banned discrimination.

Sponsored by the Comparative History of Ideas