Justice for the Wrongfully Convicted 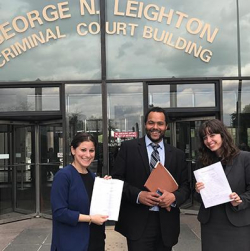 David Owens and his students celebrate outside the courthouse after wrongfully convicted Patrick Prince was exonerated.

When Patrick Prince was 19 years old, he was sent to prison for a murder he did not commit. He was finally exonerated and released nearly 26 years later, thanks to the work of attorney David B. Owens (BA, Philosophy, Political Science, 2004) and two University of Chicago law students.

For Owens, such cases are why he became an attorney.

Owens knew from an early age that he wanted to represent those whose voices were not being heard. His own experience as an African American man was a motivating factor. “Growing up in Auburn, Washington, I was one of a handful of black kids — it’s changed a bit now — and I experienced a lot of really messed up stuff because of race,” he says. “My mom would tell me, ‘You can go one of two routes. You can be angry, or you can take the power back.’ That’s what motivated me to do what I do now.”

Studying philosophy and political science at the University of Washington provided a strong foundation. Owens was particularly drawn to the Department of Philosophy, which he now supports as a donor. “I love the way philosophy helps you think and construct arguments,” he says. “It helps you see similarities where people may think things are totally dissimilar. It also makes you a richer individual in terms of being willing to change your beliefs and how you view the world.”

Owens planned to go directly to law school after graduating — he’d been accepted at Harvard and Stanford — but changed his plans after learning that Teach for America was recruiting new graduates to teach in low-income communities. The opportunity was timely since he’d just written a political science honors thesis about affirmative action, arguing that unless equal opportunity begins at the earliest stages of education, children fall behind and never catch up.

“When Teach for America contacted me, I thought, ‘You spent seven months writing this paper; now put your money where your mouth is,’” Owens recalls. It helped that both Harvard and Stanford offered to defer his admission. Owens spent the next two years teaching in a Los Angeles school where every student qualified for free lunch. “That classroom experience changed me,” he says. “It made me think about opportunity in a different way.”

Owens continued on to Stanford Law School, where he was senior articles editor of the Stanford Law Review. After earning his law degree — and a concurrent MA in philosophy — he clerked for judges in Illinois and Alabama before joining the civil rights law firm Loevy & Loevy in Chicago, where he now focuses on Fourth Amendment and police misconduct cases, and handles civil representation of the wrongfully convicted. He also teaches in the University of Chicago Law School’s wrongful conviction legal clinic — The Exoneration Project — working with law students to find justice for individuals like Patrick Prince. (The UW’s Innocence Project Northwest Clinic has a similar mission.)

Many of Owens’ cases concern police misconduct. Several national high profile cases of police misconduct have resulted in large settlements, but Owens says most cases are difficult to win. “The law is set up to protect police officers,” he explains. “And then you’ve got the social context, which is that most people have an inherent trust for police. That’s not to say as a general matter that they shouldn’t, but it does mean that if your rights have been violated, convincing a jury of that and punishing the officer is extremely hard. Particularly in minority and poor communities, if someone claims that the police mistreated them, and the officer denies it, people think, ‘You’re poor, you’re black, you’ve done drugs before, so why would we ever believe you more than the cop?’”

False confessions can be particularly challenging to overturn. Juries find it hard to imagine an innocent person confessing to a crime, especially murder, yet it happens. In Prince’s case, the most damning evidence was his confession, obtained by a detective with a history of forcing false confessions through beatings and coercion.

“There have been officers who got guys to confess to crimes that happened while they were in police custody,” Owens says. “They couldn’t possibly have done the crime, yet those people can still be convicted. There are things in the criminal justice system that are hard to undo.”

But Owens will continue to try. And through his work with the Exoneration Project, he hopes the next generation will join him.

“I really want to instill in my students the idea of service,” he says. “I want to instill in them that they can do public interest work, and that part of what it means to be an attorney — even if they go to a law firm — is to give back, to do pro bono work. That’s what we must provide as a profession. That’s the entire reason I’m an attorney.”